Pope Francis, the Cardinals Might Just Have Been Listening 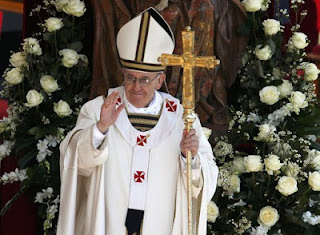 Last week, when the Cardinals of the Roman Catholic Church entered the Sistine Chapel to elect a new pontiff, I expected a long conclave (six days was my prediction) and a the election of a compromise candidate. Though I was not-so-secretly rooting for Peter Cardinal Turkson of Ghana, I thought there was a very outside chance that Boston's own Sean Cardinal O'Malley might be the perfect compromise candidate. A prayerful Capuchin Friar with whose hierarchical experience has been pastoral, far, far away from the machinations within the halls of power at the Vatican.

How surprised was I when a tweet alerted me to the white smoke and the bells ringing on only the second day of the conclave? When it was announced that Jorge Mario Cardinal Bergoglio would take the name Francis, I assumed an Italian Cardinal, had been chosen. The more I learned about this unknown Cardinal from Buenos Aires, Argentina, the more I was convinced that the Cardinals took seriously their call to listen to the Holy Spirit and choose the man who would best lead the Church in these difficult times. A week later, I am more convinced than ever that Pope Francis is both the pontiff we need and deserve. 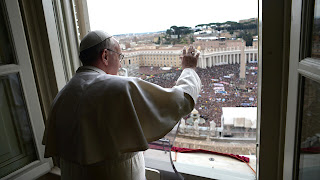 For me, Cardinal Bergoglio ticked off all the right boxes. First and foremost, he is a Jesuit. Now understand, I went to a Jesuit school, Boston College, and was influenced by many of these amazing priests, whose dedication to the Church is unflinching, so my excitement at having the first Jesuit Holy Father was palpable. In many ways, Pope Francis reminds me of the most important Jesuit I ever knew, Father Richard Cleary (RIP), a former Provincial for New England and University Chaplain at BC. He was faithful, loved the Church, and spent all his days working in ways simple and profound to spread the Gospel. I imagine a Jesuit pope will see the crises and scandals of the last decade as just one more challenge God has placed before him.

The second box ticked off is that of pastor. The Church and its people need a shepherd, someone to guide and nurture us to become out best selves. Pope Benedict XVI was a brilliant theologian who served the Church faithfully, but I suspect that even he came to believe the Church needed a different skill set. Cardinals who spend too much time at the Vatican, no matter how faithful and prayerful, can lose touch with the people of the Church. It becomes too easy to quote Scripture and the Catechism and Church Tradition and forget that people in the crush of modern life often need a kind word and a shoulder to cry on instead of a sermon condemning them for loving the wrong person in the wrong way. A pastor is connected first and foremost to his flock, and Pope Francis' continued calls to serve the poor are rooted in his pastoral experience in Argentina, which leads neatly to the next quality. 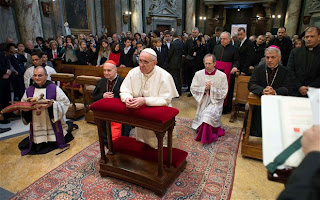 The Roman Catholic Church, the universal Church that represents over a billion Catholics, needed a pontiff from some place, any place other than Europe.The Metropolitan Cardinal Archbishop of Buenos Aires ticks another box. I might have preferred a Cardinal from the third world whose roots extend long and deep into their native land, like Francis Cardinal Arinze of Nigeria or Luis Antonio Cardinal Tagle of the Phillipines or the previously mentioned Cardinal Turkson, but there is no doubt that this son of Italian immigrants is a true Argentine. As the grandson of Italian immigrants who came to the US, I know that my identity is root firmly in the New World I was born into, and not the Old World of my grandparents. Coming out of the Church in Latin America, Pope Francis brings an experience of Church that can breathe life into the moribund practices of the Church in Europe and America. 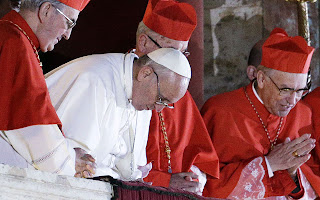 The Holy Father brings with him many other important qualities as well. He is a man of prayer, understanding that power of not only his prayer as Pontifex, but of the prayer of the people. When, standing in the loggia after his election to bless the Church gather in St. Peter's Square, Pope Francis asked that the people to pray for him before he prayed for them. This is a man who understands prayer. Even the first tweet from @Pontifex reinforced this. "Dear Friends, I thank you from my heart and I ask you to continue to pray for me. Pope Francis"

Before he went out on the loggia, Pope Francis was offered the mozzetta, the ermine lined red cape traditionally worn for the first blessing, a relic of the medieval papacy when Pope where temporal kings. He refused it saying "No thank you, Monsignore. You put it on instead. Carnival time is over!" Gone too are the red (Prada, some say) shoes. The humble archbishop who sold the palace of his predecessors and lived in a tiny apartment cooking for himself seems unwilling to play the role many might have expected. This is a man who for nearly half a century has taken seriously his vow of poverty; the humility he has learned may come as a shock to those in the Curia who have become enamored of the trappings of power, wealth, and prestige. I have a feeling those days are over.

Today, Pope Francis was installed a Bishop of Rome, first among equals, to lead the Church out of the quagmire of scandal and apathy. In his homily he alluded to how he sees his own role in leading the Church.

"Let us never forget that authentic power is service, and that the pope too, when exercising power, must enter ever more fully into that service which has its radiant culmination on the cross. He must be inspired by the lowly, concrete and faithful service which marked Saint Joseph and, like him, he must open his arms to protect all of God's people and embrace with tender affection the whole of humanity, especially the poorest, the weakest, the least important, those whom Matthew lists in the final judgment on love: the hungry, the thirsty, the stranger, the naked, the sick and those in prison (cf. Mt 25:31-46). Only those who serve with love are able to protect!"

I will be praying for him. I hope you will be too.