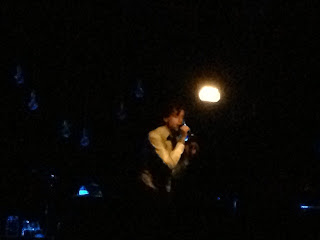 Last night singer-song writer Mika performed at Union Transfer in Philadelphia. It was billed as "An Intimate Evening with Mika," and it was, with Mika at his piano, and only two other band members covering keyboards, drums, bass, and assorted necessities. For an artist who has put on carnival style stadium shows in Paris, this was just a man and his music.

Opening with his first big hit "Grace Kelly" from Life in Cartoon Motion, Mika revved the crowd up immediately. For the next half a dozens songs or so, he played favorites including "Lollipop"  and "Blue Eyes". The crowd loved every minuted of it, singing along while the musician in Mika played with the arrangements to keep the old favorites fresh. 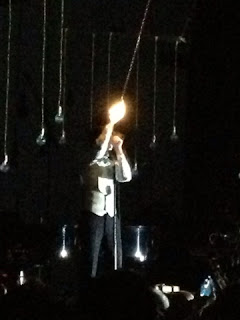 Launching into songs from his newest CD, "The Origin of Love," Mika raised the energy level with "Love You When I'm Drunk," which had the crowd bouncing, smiling, and singing at the top of our lungs. Preparing to sing "Emily," Mika admitted that his father hates the song because it makes his mother look like a raving bitch. Mika sang the original French version "Elle Me Dit" which brought the crowd to a fever pitch.. In a moment of lighthearted self-congratulations, he admitted it is an amazing song.

In the most unscripted moment of the night, Mika moved on to play his ode to Broadway musical "Wicked" with "Popular Song." Twice the piece broke down when he forgot the words (that belong his duet partner in the recording). Unlike the many pop acts singing to a back up track, Mika's grit showed through in this embarrassing moment. He opted to come back to the song later in the show and completely rocked it.


What comes through most in in Mika's performance last night is his immense talent. Whether his musicality, his ability to play piano with such passion, or his four octave range, Mika pours his heart and soul into his performances, drawing the crowd in with him. It's his storytelling that might be be the most compelling talents for this song writer. His empathy for the marginalized comes out in songs like "Billy Brown," "Big Girl (You Are Beautiful)," and "We Are Golden."

Mika's music is poignant and sweet, but more than anything it is fun. Though Mika often sings of sadness, I find him to be an optimist at heart, one who believes in love, who thinks everyone deserves love (and no one can define that love for another person). If there is a single message in Mika's music, I think it might be this: Happiness can only come from within, but you have to create it for yourself and not look outside for it.


An international star who has a massive following in Europe, I cannot understand Mika is not more popular in the US. I'm not complaining though, I have been privileged to see Mika twice, both in smaller venues (3,000 for the Electric Factory in 2009 and 600 at Union Transfer last night), and if he was as popular here as he is in Europe, I would never have enjoyed myself as much as I did. So, shhhhhhhhh...