Beijing is not Shanghai and Other Observations 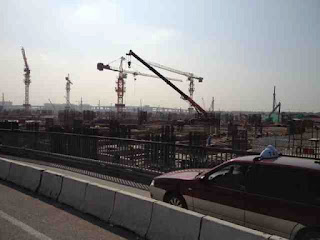 Thursday was a travel day. I to the high speed rail from Shanghai to Beijing, which took just about fur and a half hours to cover a little over 600 miles. The train was clean and comfortable, incredibly fast, and a great way to see the countryside. Before coming to China, I had heard about empty cities built either by the government or entrepreneurial construction companies. Well, they entirely dot the landscape of this massive nation. Everywhere are these tall apartment complexes, sometimes a dozen group together, enough housing for thousands if not tens of thousands of people to live. Yet there is no infrastructure, few roads, no public transportation, no stores, no entertainment. It is obviously unfinished, few of these projects look like work to finish them is continuing. It is like the money ran out, and the project just abandoned. Maybe this is a jobs program. (The picture below is a much more active construction site in Qingpu near the train station.)

It became immediately obvious upon arrival at the train station that Beijing is not Shanghai. It is the capital, run by the Party, and its presence permeates society in little yet noticeable ways. For instance, people queue for taxis and traffic regulations are followed. I have yet to see someone run a red light or drive the wrong way up a street. There is a much great military and police presence here, which makes sense. 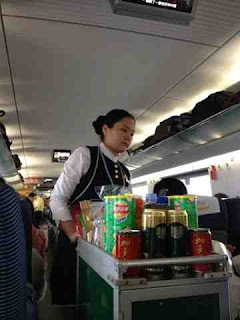 Beijing is also filled with people ready to serve (or better yet scam) the tourists who visit. Not ten minutes into my walk to Tiananmen Square I was approached by a young women who "just wanted to practice her English" and then suggested we have a cup of coffee. The moment I said no she turned away, but her friend then interjected to ask if I like art and want to go to an art show. Finally, as I was heading back to the hotel later in the evening, I was definitely propositioned right in the middle of a pedestrian shopping district.

Shanghai has a frenetic energy about it, but the economic freedom that its people enjoy is evident in lots of little ways. For instance, I could not get a single government employed worker in the Tiananmen Square souvenir shop to pay any attention to me. They flat out ignored me and my money. Rarely was that the case in Shanghai. I will say the touts in Beijing will give their international brethren a run for their money. Do not look at that statue of Mao at a street stall, for you will be swarmed. 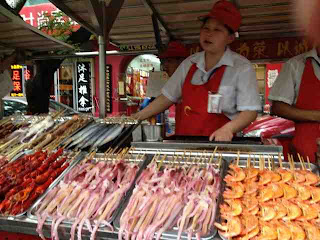 So I ventured to the Dong Hua Men Night Market for some adventurous eating. Known for its bizarre selection of food on a stick, I learned quickly I am less adventurous than some people might think. I skipped the scorpions (life and dead), baby sparrows, crickets, and all manner of offal including kidney, testicle, and other tasty tidbits. In a soup or topped with a sauce is one thing, but grilled on a skewer proved to be too much. I did venture to try stinky tofu (the blue cheese of tofu, as it is fermented with bacteria) which was not bad considering there were three different sauces and coriander to bury the pungency. It was not nearly as good as the bamboo tofu the day before. 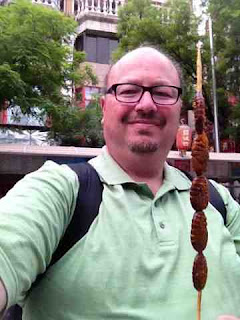 I had some lovely vegetable lo mein noodles with chili sauce and a Chinese cheese grilled on a stick with a sweet tamarind like sauce brushed on it. The cheese actually became crispy like toasted bread, but its flavor was definitely cheesy. For dessert I had some steamed cakes made from chestnut, corn, pea, and a fruit I did not recognize. Sweet desserts like Americans and Europeans enjoy are pretty unusual in China, so this was the best I was getting. I try one Beijing street food delicacy, silkworms in the cocoons. Grilled with a spice mixture sprinkled on top, these babies were crunchy on the outside and creamy on the inside with a definite bug-like quality to them. I recommend them, because everyone needs to eat something totally gross every now and again. 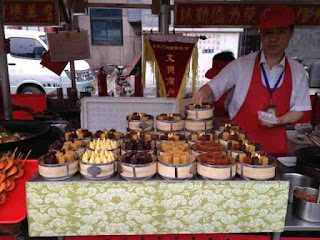 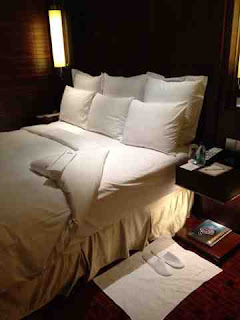 Finally, the Marriott rocks, wherever you are in the world. I stayed with them in Istanbul and now in Beijing. Their service is impeccable, the rooms are huge, and the concierge service is beyond helpful. Last night the turn down service provided slippers, a glass and 'free' bottle of water on the night stand, and the weather report hand written on a card for the next day. Free wifi in the lobby is great too. Tonight when I return from dinner I shall enjoy a drink and tell you all about the Great Wall and Black Sesame.