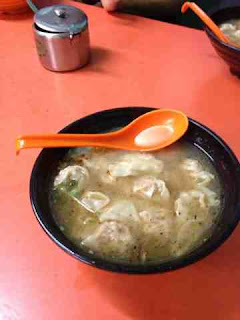 Once upon a time, many years ago, half a world away, I was visiting New Orleans for the first time. On this new fangled thing called the Internet, I discovered a culinary tour of the Big Easy that explored some of the classics for which the French Quarter is duly famous. As it turns out, there is no better way to learn about a new place. This last autumn, when I was doing ridiculous amounts of research preparing for my trip to Istanbul, I discovered Istanbul Eats, a food blog that had recently started offering culinary tours. Their network of food blogs, Culinary Backstreets, led me to UnTour Shanghai, and their Dumping Delights Tour that explores the French Concession.

We began with potstickers. I knew they would be good the moment we arrived, because this was the only item this chef served from a tiny stall with no seating, an immediate sign that he knows what he is doing. Secondly, he insisted on making a knew wok full of potstickers for us, refusing to gives us the last of the previous batch that had been sitting longer than chef liked. (Nothing is wasted though, a local bought them.) Of course, anything fried is delicious, but this little pork pillows were heavenly--crispy, juicy, and not greasy at all.

Shanghai style dumplings eating requires vinegar, that hit of acid that brightens the flavor and keeps things from getting to heavy. We followed the potstickers with Shanghai's specialty, soup dumplings at Nanjing Soup Dumplings. We had two kinds, pork and pork with crab roe. Unlike those I had sampled previously, the wrappers on these were nearly translucent, with a perfect hit of soup and meatball. The crab roe dumplings were ridiculously delicious, reminding you why seafood and pork maybe God's greatest gifts to man. 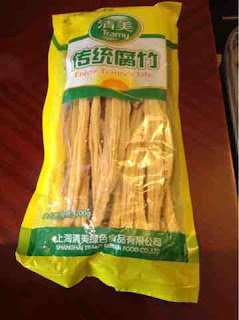 Next we sampled boiled dumplings at Harbin Dumpling House which were filled with a mix of pork and veggies, celery and various greens. (Obviously I can hardly be bothered to pay attention to vegetables.) in all honesty, these were my least favorite style of dumplings, though the preparation at Harbin was excellent, there's just something about these that leave me flat. At the same time, my favorite discovery of the day came at this same restaurant, and believe it or not, it was tofu! This particular style of tofu is not your typical squishy, jiggly mass of blah that is most store bought tofu in America (nor is it stinky tofu that tofu connoisseurs relish.) this is bamboo tofu, made from the skin that forms while making tofu. When the skin is removed it, it is gathered up in long rods that resemble bamboo. The tofu hardens much like dried pasta. Reconstituted by soaking in water, broken into bit size pieces, and tossed with sesame oil and a bit of celery, this was like the healthiest pasta salad ever. It was so good I purchased some to bring home.

Next was my favorite stop of the tour, Hang Yue Xuan Dim Sum. This was the very opposite of street food and tiny store fronts we had been exploring. This is Hong Kong style dim sum served in a hotel cafe with white linen table cloths, porcelain china, and wait staff that would make the Four Seasons proud. It was a perfect respite from the honking horns and suicidal bikers, and the chrysanthemum tea  was a delightful start. The dumplings here were made with wrappers of gelatinous rice, and included a traditional style dumpling with golden shrimp as well as a long flat dumpling filled with a bit of meat accented with soy sauce and chives and hint of ginger. Each was delicious, and I would happily feast on these any day of the week. We also sampled pork buns and the sesame coated sweets that are often filled with sweet bean paste. These had banana, a change from the norm. 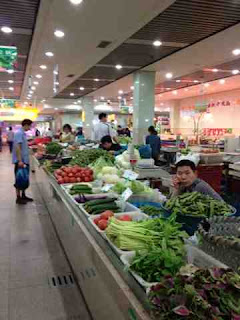 Walking off all the dumplings through one of Shanghai's much used parks, we headed for a local wet market where locals shops for everything from vegetables, noodles, meat, fish, tofu, rice, beans, and more. This is where you shop for the ingredients for tonight's dinner. Everything is incredibly fresh...the fish are alive until you by it (one customer was buying a fish head for soup). Almost every vegetable hawker had fresh spring fava beans for sale, as they are in season right now, and they will happily do all the work shelling these beauties. Normally there is a live chicken market here too, but with the outbreak of the newest avian flu, authorities in Shanghai have closed down all the live poultry markets to prevent contact and thus transmission. Though western media love a dramatic story, the avian flu seems to be pretty well contained. The strangest items at the wet market were the soft shell turtles, frogs, and the salted and fermented eggs. An acquired taste I'm told. 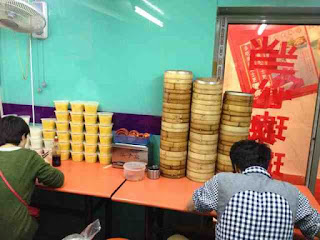 Our final stop was Qin Huai Fang, where we had dumpling soup (as opposed to soup dumplings). The chef here make his own fresh broth every day, a far cry from the bullion that forms the base for many soups around the city. The depth of flavor was exquisite, and the dumplings were so delicious. I wish I had had room for the ample serving, but next time I have a cold I want a galling of this to restore me to health. The dumpling tour was a delightful way to explore Shanghai. Food connects people, in a multitude of ways, not just the act of sharing a meal, but in a more ethereal way, connecting people across the city and through the years when they partake of something traditional like a dumpling. Thanks to UnTour Shanghai, I feel a part of this great city, if only a tiny bit. 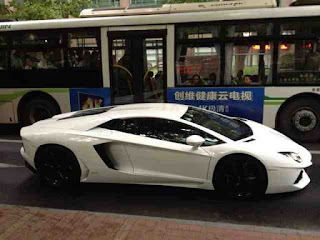 Though I did see a Lamborghini up close on my way to the Metro, the rest of the day was a little disappointing as the fog that rolled in before the rain blocked my view of the financial district's skyscrapers. Because of the coming rain, the Peace Hotel was not opening it's rooftop lounge where I had planned to relax with my friend Lloyd and share a cocktail or three. Instead we ended up at the run down Art Deco jewel the Metropole Hotel where we had the bar to ourselves. It was a a good way to end my last day in Shanghai. Tomorrow Beijing.