Posted by Unknown on May 19, 2013
Friday I took a private car and guide, recommended by the Marriott, to the Mutianyu section of the Great Wall of China. There is actually one wall built on top of another here. The original wall, constructed during the Northern Qi Dynasty (550 - 557 AD). The second wall is from the early Ming Dynasty (1368 - 1644 AD), built to keep out the Mongols, whose dynasty had just fallen. In 1989 this section of the wall was restored again for the tourists that come by the millions. 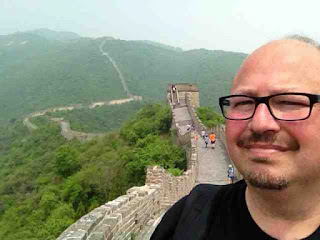 Mutianyu sits on top of the mountain, making it the steepest and most challenging section of the wall near Beijing. There is a cable car that runs to the top, from which you can explore the twenty-three watchtowers which housed soldiers and arms and could be used for signal fires. Troops even moved across the Great Wall quickly in times of crisis. Mutianyu is surrounded by lush forest, giving this section of the Wall a natural beauty second to none. It also poses an immediate question, how did workman transport the materials for the Wall to the top of the mountain without the aid of today's Swiss built cable car?  Here is another engineering feat accomplished without modern machinery, like the Hagia Sophia in Constantinople or the Coliseum in Rome. I stand in awe, truly.

Climbing Mutianyu was a workout, even with the cable car doing most of the work. Dripping sweat, choking on Beijing's infamous smog (that is NOT a foggy early morning in the photo, it was about 11 AM and hot as blazes), I hiked through a half dozen or so of the watch towers, crossing paths with the Lehigh women's volleyball team along the way. The nicest part about Mutianyu, apart from the beauty is the lack of tourists. Being so steep and further removed from Beijing, fewer people visit, making it a less crowded experience, which is China is really saying something. 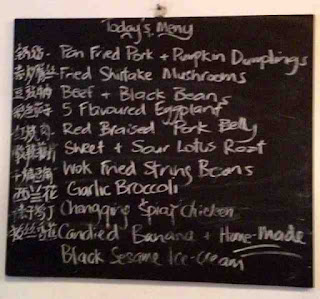 Returning from the Wall (after stops in a jade factory, a tea house, and a cloisonné factory to make the requisite purchases of gifts), I relaxed at the hotel, watched Liverpool beat Fulham, then headed to the culinary highlight of the week, dinner at Black Sesame Kitchen. This innovative project is part culinary school, part private dining, part restaurant. I was there for their regular dinner, which is a ten course meal composed of traditional Chinese dishes, cooked with quality ingredients by deft hands. Dinner is served at one of two communal tables, ours included four kiwis, a couple from Boston, two women from Purdue University, and a young couple from Canterbury, who were returning for a second time they so loved it.
I can say without hesitation this was a meal I will remember for a long time to come. Nine of the ten dishes were outstanding. The tenth was broccoli, enough said. Generous pours of Austailian Sauvignon Blanc and Shiraz washed it all down nicely. 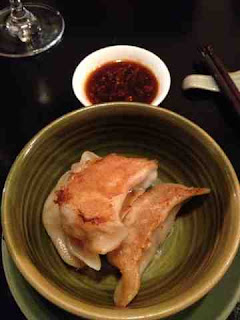 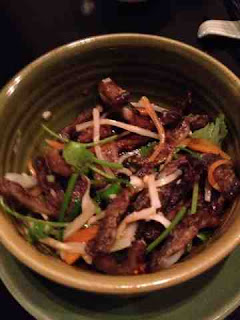 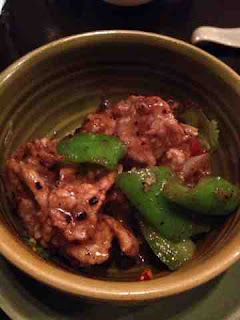 Beef and black bean (tender and worth seconds) 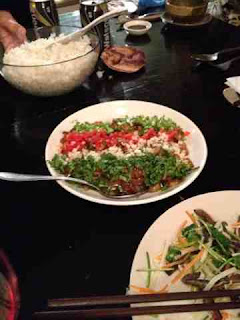 Five flavor eggplant (why can't we fund eggplant this good in America?) 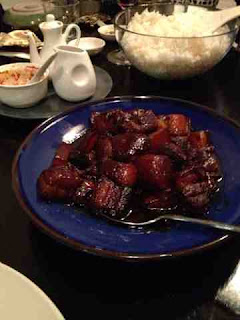 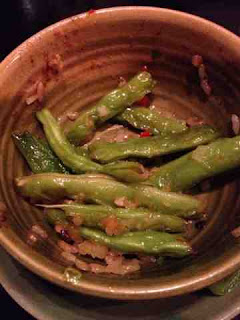 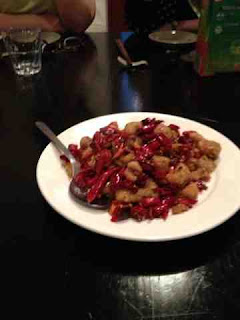 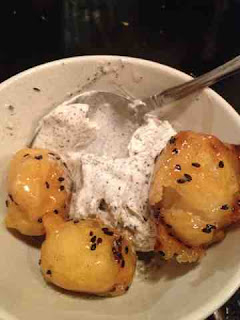 It was a delightful with excellent company. Thank goodness for TripAdvisor where we all learned about Black Sesame Kitchen. Next time I venture to Beijing, I'm taking the cooking class!

Taxis, unlike the Wall and Black Sesame kitchen, are not so great. First was the driver who, upon realizing I spoke no Chinese, decided to transform from a decent driver to someone playing with his phone (to the point of other drivers honking and passing as we sat unmoving), eating, and in general being very unpleasant. When we finally arrived at my destination, he tried to cheat me, attempting to take 10 RMB more than the fare, until I pointed to the meter. He just smiled like the proverbial ki with his hand in the cookie jar and kinda shrugged like 'Well I tried.'

As bad as that was, the second driver of the evening, picked me up after dinner. I presented the card the hotel had given me with instructions in Chinese for taxi drivers. This driver could not seem to comprehend the instructions. He pulled over, about a kilometer from where he had picked me up, to get me to explain, which I couldn't, where I was going. A lovely local couple, waiting for their own cab, observed my predicament and offered to help. I showed her the card, and she told him where I was going. He did not understand. I told her if he could get me to Tiananmen Square, I could walk from there. Everyone in Beijing knows how to get to the central square from which the People's Republic was proclaimed by Chairman Mao. Everyone except this guy! It seems he was a new driver not from Beijing.

I exited the cab and chose to walk in the direction I thought my hotel was in. Not a single free cab passed in more than an hour of walking. Finally I gave up and allowed a rickshaw driver to take to to the hotel. Powered by an electric/human-powered bike unlike the rickshaws of bygone days. Finally, I crashed, realizing Beijing was off my list of cities in which I would want to live.