Posted by Unknown on May 19, 2013
My last two days were bit of a mad dash to see things, at lest until I hit a brick wall, and decided I ended a break. It all started off so enthusiastically though.

Saturday morning I started early, heading to Tian Tan Park, where the Temple of Heaven is located, just south of Tiananmen Square. I had read that like all parks in China, tai chi practitioners use the park first thing in the morning. Tai chi, it turns out, was the least of it. Of all the places I have visited, the Chinese people are the ones most likely to use their public parks both for communal gatherings and exercise, and this is not mommies pushing strollers or watching the kids play.

There were middle aged ladies line dancing (in more than one places, in fact probably half a dozen or more), lots of badminton and other impromptu racket sports, and a hacky sack like game (with a bean bag with feathers played by the very acrobatic. In addition to the line dancers, Mao love them, there were ballroom dancers (at least a dozen couples), a band of retirees playing traditional Chinese music with traditional instruments, and to top it all off was the Beijing Tibetan Dance group with easily a hundred dancers, some costumed, some not, dancing their traditional folk dances. One after another they danced, celebrating their identity through the Terpsichordian art.

Finally, their were card games galore, with small groups leaning on any flat surface available to play unknown games punctuated by outbursts of laughter. As I was leaving, after exploring the Temple itself, I found six or so water calligraphers, who use brushes and sponges to write beautiful Chinese characters on the side. It is written language as ephemeral as spoken words, for soon the characters are gone. Some seemed to tell entire stories in their many small characters, while one man's script was   Massive, each symbol approximately three feet square.

The Temple of Heaven is the imperial altar completed in 1420 where the emperor would pray for abundant harvests and intercede on behalf of his people as the son of heaven. It is in fact a complex of buildings and platforms, each with a specific purpose. The emperor would offer wine and grain and an entire ox among other things like music. The showpiece of this temple mount is the Hall of Prayer for Good Harvests. It has a three tiered roof, built without a single nail of Cyprus wood, and is covered in painted tiles of cobalt blue, free, and red accented in gold. Filled with symbolism like the dragon (emperor), the phoenix (empress), and plenty of squares (earth) and circles (heaven). It reminds me greatly of the Dome of the Rock in Jerusalem, with its garish and gorgeous colors and monumental scale. The draw back in Beijing is the lack of blue sky to serve as a backdrop and the layer of grime already collecting, even though it was fully restored for the 2008 OLympic Games. 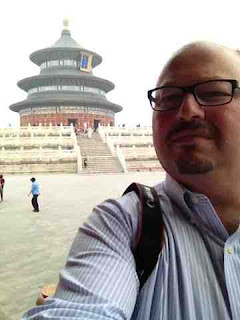 From the Temple of Heaven, I hopped in a taxi for the Lama Temple, Yunhe Gong, an imperial palace turned lamasery for the Yellow Hat sect of Tibetan Buddhism, which twice served as the official religion of China. This is a huge complex, which lacks the money and gilding of the Jing an Temple in Shanghai but offers five halls in which to worship the Buddha, including on dedicated to my favorite, the Smiling Buddha, the reclining paunchy monk, happy and content. In the fifth hall stands a statue of the Maitreya or Future Buddha. It stands 60 feet high and is carved from a single sandalwood tree, even holding a Guinness World Record. 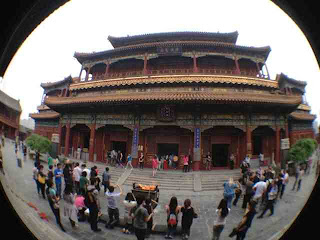 After the Lama Temple, time was running short and so I only walked by the Confucius Temple, peaking in to see the statue of the Chinese philosopher. Then it was off to Maison Boulud, the Bejing outpost of New York based French chef Daniel Boulud. Housed in the old American Embassy, a beautiful grand old mansion of bygone days, it was fun to imagine what it would have been like as the diplomatic legation in China. Brunch was a wonderfully relaxing respite from the frantic touring, but typical of brunch, the food was only good, nothing spectacular. The service, though, was impeccable, and the mango jam I would have purchased by the jar if they had it. The escargot were delicious as always. 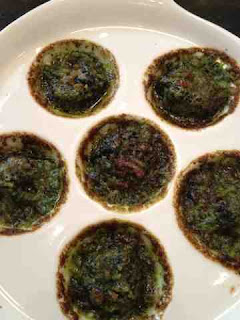 After brunch, I returned to the hotel to enjoy the expensive room my Marriott points had purchased. I noticed that the smog was starting to get to me, and I was feeling a bit run down. I decided to stay in, which meant I never made it for Peking Duck or more exploration of night life in Beijing. Instead, a Chinese foot massage in the hotel spa and Cantonese Wonton Chicken Noodle Soup and "Game of Thrones" on HBO made for a relaxing evening.

Sunday morning before heading to the airport for my four o'clock flight to Vancouver, I finally had the chance to explore the Forbidden City also known as the Palace Museum. This is where the Ming and Qing emperors lived in isolation in the capital, with their court, eunuchs, concubines, and extended family. It is said to contain 9,999 rooms (for 10,000 would be inauspicious). The Forbidden City is daunting in its scale, certainly a place designed for someone being carried in a sedan chair (which would have been nice by day ten).

It is hard to describe the decay of the palace where the outside has been better preserved than the inside. Most interiors were not well lit, yet were open, at least partially to Beijing's smog, coating everything. Every case containing a display was covered in grime. For all I know they were washed last week, but I doubt that. The Treasury contains what ought to be spectacular imperial pieces from rituals devices to personal jewelry to jade carvings second to none, but they are so poorly displayed, it was hard to appreciate them as they deserve. One of the highlights though was the Nine Dragon Screen, carved for the emperor. (Ignore the angry countenance...too many people kept walking into my photo. 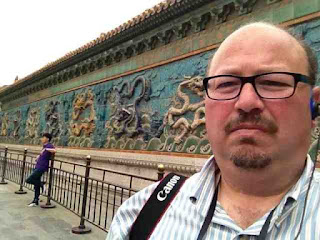 The state workers once again proved, at least to the outside observer, to have little incentive to do more than the minimum. One room watcher (I won't call them guards) was talking on her phone the entire time, paying little attention to the tourists streaming into the room. At one ticket office, i counted a dozen workers, but only one at the window helping customers, and this was minutes after the official opening. the rest were chatting away without a care in the world. The audio guide was quite good for only 40 RMB. It was keyed to GPS locator beacons, so it would play automatically when you entered a space where a description was recorded.
All in all, China was an amazing experience. If I must choose, I prefer Shanghai, but Beijing does have lots to recommend it. The air quality, which I have mentioned repeatedly, is a massive issue. Shanghai is less buttoned down with an energy that I admire. Truth be told, there is much more of China to explore, including Xian with its Terracotta Warriors, Hong Kong with its dim sum houses, Macao and its casinos, and so very much more. Plus there is the rest of the Far East, Japan, Thailand, Cambodia, South Korea, Vietnam, and much more. I will be back!