Scallion Pancakes are Real, and Other Thoughts from Shanghai

Posted by Unknown on May 20, 2013
So yesterday (Monday) was my first real day in the city proper of Shanghai. Until then, I have been staying with my friend Lloyd in the hinterland of Qinpu District. Though staying at the end of the line has been challenging, it has has its own rewards, and breakfast yesterday was one in them. Bruce and I returned to the meat in a stick restaurant in the village and enjoyed a typical breakfast of the hard working folks of Qinpu, most of whom come from other parts of China looking for work. 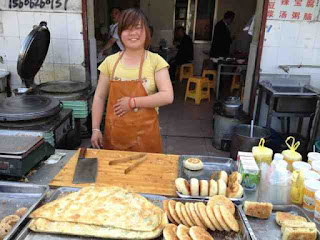 We had scallion pancakes (imagine my surprise when learned they are real, xialongbao or soup dumplings for which Shanghai is famous, and tea eggs (hard boiled eggs done in tea, instead of plain water). Simple but incredibly delicious, we shared a table with a couple of locals and devoured this authentic breakfast.

Sunday in Zhiujaijaio I visited the Temple of the Town God where I was told by a seer (or a guy employed the the state) that I would have much luck, and the bigger the donation I made, the more luck I would have. I gave the temple 50 RMB, and chalked it up to a restoration fee. Well today on the bus into Shanghai and again on the Metro, I got a seat to sit down. Indeed, my luck was very good. Maybe I should become a Taoist. 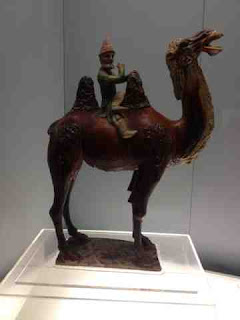 The morning I spent at the Shanghai Museum, which tells the story of China through art--bronze, calligraphy, pottery, painting, statuary, jade, and coins. There is even a nod to China's minority groups with an exhibit on native dress and other handicrafts including Tibetan masks. (Interesting sleight of hand claiming Tibetans as a minority group within greater China and not an occupied country.) The Ming and Qing vases were as wonderful and delicate as you could imagine. It is amazing to see such incredible artisanal workmanship preserved for hundreds and even thousands of years in the case of the bronze works and Buddhist statues.

After a quick visit to the No. 1 Department Store and then Starbucks to wet my whistle with a green tea frappuccino (did I mention it has been near 90 every day and I feel like I'm in Florida again?), I headed off to Donghua University where I had been invited to speak to a class of international students there to study conversational English and Chinese. These students were from South Korea, and we had a nice discussion of the US Constitution and American democracy. They also told me what they liked and didn't like about Shanghai. Everyone recommended that I visit Korea next. 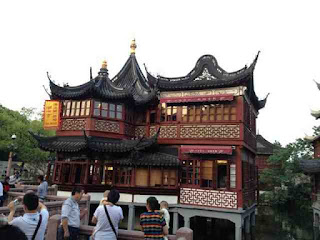 After class, it was off to the Yu Garden and Bazaar. The gardens are very formal with trees and koi ponds, buildings and rock formations, all meant for contemplation. Part of the Temple of the Town God, the garden is meant to help you in your contemplation. Built during the Ming dynasty, Yu Yuan is one of the places in Shanghai to become acquainted with old China. There is also a tea house set in the middle of a pond which is approach by a zigzag bridge to protect the structure from evil spirits, which cannot turn corners. The bazaar, like every bazaar in the world, has been taken over has been taken over for the express purpose of selling cheap junk to foreign tourists. At least here, when something says made in China, you can honestly say it was made by the locals. 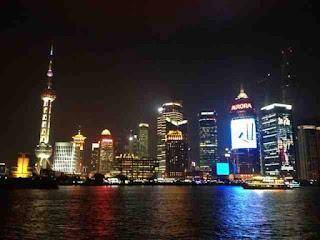 After a poor excuse for a dinner, my new friend Wendy, who managed to order an inexpensive travel tripod and have it delivered in one day, took me to the Bund promenade on the Huangpu River so I could take pictures of the famous skyline of skyscrapers featured in Skyfall. There is a terrible one from my IPhone on my Facebook page, but the ones with my new Canon on the tripod look incredible. Those will have to wait till I return to the states and can upload them to Flickr. Suffice it to say they have the potential to make me look like I know what I'm doing (when in fact the camera and the tripod are doing all the heavy lifting.) 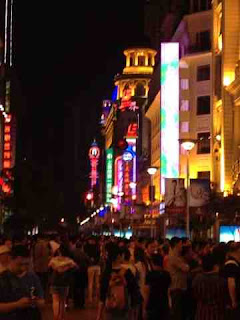 To close out the day, we walked from the Bund to People's Square all Nanjing Road, the pedestrianized shopping road that is Shanghai's answer to Las Ramblas and the Champs-Elysées all in one. Here there is karaoke on the street, middle age ladies line dancing, opera singing, and tango and more shopping than you can stand. The greatest job in the world, I'm convinced, has to be a neon light artist in Shanghai, for not only are their literally hundreds of neon signs along Nanjing, but the Chinese characters lend themselves to forming truly artistic works, especially to the eyes of one who can only identify the one character that means men's room. 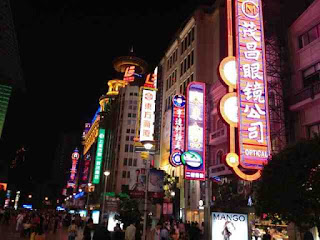 It was a great day, and my feet still hurt, even after a good nights sleep. More adventure awaits though.

Bollywood replica outfits for men said…
I found your weblog the usage of msn. That is an extremely well written article.I'll make sure to bookmark it and return to learn more of your helpful information
1:25 AM