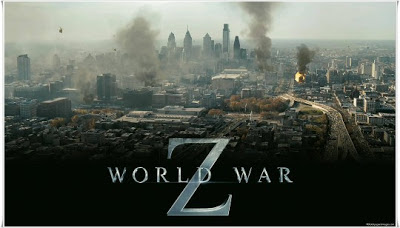 World War Z by Max (son of Mel) Brooks has been sitting on my iPad waiting to be read. I opted to wait for the movie’s release, so that I would not be disappointed by Hollywood’s mistreatment of another book-turned-movie. Not yet having read the book, I can only judge this Marc Forster affair on its own merits.

After Night of theLiving Dead and all its reanimated sequels, 28 Days Later, Zombieland, Shaun of the Dead (funny zombies), Dead Snow (Nazi Zombies), Resident Evil (video game zombies), and of course television’s The Walking Dead, was there anything new to say? World War Z finds a way to be both fresh and frightening amidst all the hype.

Traditionally, zombies are slow and plodding but their numbers overwhelm most unarmed and defenseless populations. The well armed, the preppers, the Israelis, ought to find a means to survive. These zombies are something different all together. Even faster and more agile than the zombies of 28 Days Later, the zombies of World War Z are everything that is most horrifying about this version of the apocalypse. Though I’m not quite sure how a reanimated corpse attains such strength and speed, I’m willing to suspend disbelief, at least for a little while.

Brad Pitt is the perfect reluctant hero, who wants nothing more than to protect his family. He has the qualities that make for a true action star, with the dramatic chops to appear more the vulnerable every man than the action heroes portrayed by Stallone or Schwarzenegger. It makes it easy to like Gerry Lane (though he can be a bit whiny about his family). Working for his former boss at the UN, he sets out to save the world but really he just wants to save his family.

An original zombie plot is not an easy thing to come by; maybe it doesn't even exist anymore. World War Z goes for the simplest story line: Strange new disease appears ravaging the world, transforming the human populace into crazed, bloodthirsty animals, without intelligence, only following their basest instincts. Solution? Find patient zero, manufacture a vaccine, save what’s left of the planet. Easy, right? Brad Pitt plays the former UN investigator pressed to accompany a Harvard epidemiologist, who is the world’s best hope to find a cure.

World War Z uses the big screen to perfect effect. From wide-open cityscapes in Philadelphia, Newark, and Jerusalem, to the tightly enclosed spaces in a battleship, jetliner, and WHO research facility. Director Marc Forster manipulates each of these to tell his story, with fear and terror, disappointment and relief, and the occasional tender moment thrown in for contrast. Locations help dictate pace as the movie shifts from tight, tension filled spaces to heart-pounding races to escape.

Now, more than before, I’m ready to read the book. I hope it’s as good as the movie.