The King's Deception by Steve Berry 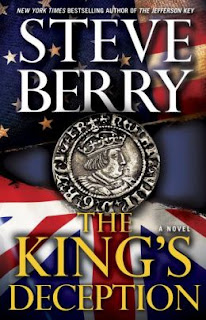 I love Steve Berry's books. They are a near perfect blend of conspiracy theory and action adventure, with a hero who is smart, likable, worldly, and capable. A navy flier-cum-lawyer-cum-secret agent-cum-book seller, Cotton Malone is retired from the fictional Magellan Billet, an investigative team of intelligence officers working for the Justice Department. Malone is a magnet for misadventure, often finding himself in the middle of one plot after another as a result of some favor, some friend, or some fiend. Ultimately pure courage, timely assistance, an eidetic memory, and a moral compass second to none leads to the solution that saves the day.

The King's Deception is Berry's latest offering, and it another great summer read. Scotland is about to release the Libyan agent convicted of the Lockerbie Bombing on compassionate grounds do to a terminal cancer diagnosis. The CIA is attempting to unearth a nearly 500 year old secret that might force London to intervene with the home government in Edinburgh to stop the release. With a cast of characters including the head of MI6, a Scottish street urchin, a pair quintessential English old maids, a reckless British investigative agent, a murderous American traitor,  and a shadowy group known as the Daedalus Society, The King's Deception is a cagey race where the finish line keeps moving and no one is safe.

What makes Berry's writing so entertaining is the blending of history and contemporary events into a plausible conspiracy with a treasure hunt to boot. The descriptions of places like Jesus College at Oxford, the Inns of Court, St. Paul's Cathedral, the London Underground, Hampton Court, and a slew of others locales become real through Berry's eye for detail. What drives the story forward is the human element, the confluence of poor decisions that characters make for one reason or another, but there is no story when every makes the choice that keeps them safe.

If there is one criticism of The King's Deception, it is that the characters are all too brilliant. Everyone knows far too much about obscure topics, having read just the right book or visited this place before. I'm pretty well traveled and have read and taught history, but even I feel like a massive underachiever compared to big brain individuals. It's a minor quibble, but it does seem to be a lack of dumb guys.

All in all, The King's Deception is a funi read, especially for you Anglophiles, conspiracy lovers, and lovers of the secret agent genre.