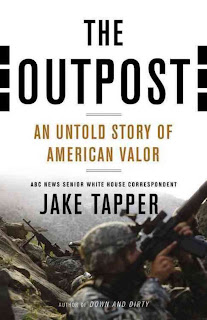 I have wanted to read Jake Tapper's The Outpost: An Unknown Story of America Valor for a while now. First, I like Jake Tapper, formerly of ABC and now on CNN; I think he is possibly the best Washington reporter in the American media today and his Twitter feed rocks. Second, though I have followed the war in Afghanistan pretty closely (including having friends who have served there), I still didn't feel I understood well enough. Finally, two Medal of Honor were awarded for service above and beyond the call of duty in that final epic battle at Combat Outpost Keating, and MOH recipients and their stories are always worth knowing.

In truth, The Outpost is the most compelling book I have read this year, possibly this century. Tapper takes the reader to the very beginning of this particular story of the war in Afghanistan, to the moment in 2006 when the Army made the decision to move into Nuristan, a ridiculously mountainous region of the Hindu Kush that borders Pakistan. The idea was to put an American forward operating base near Kamdesh Village, really a collection of tiny villages, that would fund local development projects (water, power, infrastructure). The prevailing counter-insurgency philosophy sought to co-opt locals into driving out the insurgents or at a minimum controlling those in their midst.

The placement of the outpost in the valley at the base of three mountains made it too easy a target for the insurgents, who regularly attacked the Americans. Part of the reason for placing the outpost in the valley was to make resupply easier, as it was right on the main road from Jalabad. Unfortunately, the road was too narrow and too unstable to be used by anything larger than a humvee. The outpost would ultimately be named for Lt. Ben Keathing who would give his life on that dangerous road trying to return a massive piece of equipment that had been ordered returned. By the time of the Battle of Kamdesh, the road had been completely abandoned by the army, and the rare resupply came by helicopter only one the darkest of nights.

In telling the story of Combat Outpost Keating, Tapper manages to not only tell a story of uncommon valor, but he also displays the series of military decisions and non-decisions that resulted in what will probably be the most remembered battle in Afghanistan. What becomes very clear early on is that the chain of command, as important as it is in keeping order in a massive organization like the military, has the ability to compound bad decisions, because the soldiers who suffer the consequences of those lapses in judgment will have had no input in the decision itself. The chain of command silences all dissent; even intelligent reasonable requests can, and were, shut down by a single officer unwilling to entertain the idea that their decision might be wrong.

Without ever pointing fingers or editorializing, Tapper never shies away from revealing the flaws in those whose story he is telling, even of those who died. In my own mind I was more likely to memorialize these fallen soldiers, but Tapper present a very human portrait that is layered with valor and honor and sacrifice and occasionally marred with hubris, weakness, and sheer stupidity. It is an honest accounting, and those who served at COP Keating deserved nothing less.

Whether you are interested in military politics or Afghanistan or not, the Battle of Kamdesh itself is mosaic of heroic moments that define the American spirit. Ty Carter and Clint Romesha both received the Medal of Honor for their actions in this battle, and they represent the essence of what it means to be a hero. Specialist Ty Carter risked his life multiple times in efforts to save other, including wielding a chainsaw like lumberjack to bring down a burning tree that threatened the medical station. When he returned stateside, Ty Carter sought help for his PTSD, and has sense encouraged other soldiers to do the same.

Meanwhile Staff Sergeant Clint Romesha organized the remaining men and pushed back the insurgents who had entered the outpost itself, knowing that he must either succeed or die trying. One soldier told Tapper: "Bullets were ricocheting off the truck right next to him [Romesha], but the staff sergeant just stood there looking back at Koppes, smiling the whole time. Holy shit, he's lost his mind, the specialist thought."

Eight men died at the Battle of Kamdesh and twenty-seven were wounded, not to mention all those who died before this final battle. We must honor those men by making sure that when we send young men into war, we do it intelligently, providing the soldiers with everything they need, including the chance to win. We need more Ty Carters and Clint Romeshas too. And we need to tell the stories of these American heroes. I'm glad Jake Tapper did.