Chef's Tasting at Fork in Philadelphia

Fork has been a mainstay in Philadelphia for more than a decade and a half thanks to restaurateur Ellen Yin's vision and attention to detail. My first meals there was a lunch during restaurant week a couple of years ago. I remember it being one of the best lunches I had eaten in a long time, having order the charcuterie plate which was out of this world. I mentioned to Ms. Yin how much I appreciate a restaurant week meal that was every bit as wonderful as the full price meals for which Fork was known. I knew then that Fork rightfully belonged in the pantheon of Philadelphia food culture.


A year ago, Fork was reinvented with a hip, new interior and a hip, young chef in Eli Kulp,formerly of Michelin starred Del Posto and the extraordinarily popular Torrisi Italian Specialties, both in New York City. Kulp's migration to Philadelphia is definitely a loss for the Big Apple but a significant win for the City of Brotherly Love. Kulp continues the tradition of excellence at Fork with a creative menu that delivers equal parts technical skill and complex flavors.

Sunday my friend and I decided to indulge in the ten course chef's tasting menu, at a cost of $110 per person. (I had to call it my birthday dinner in order to rationalize the unexpected expense.) Chef's Kulp's meal was worth every penny. The first course was the perfect star to this culinary adventure, smoked trout caviar will dilled cucumber  and bagel chips. Why, oh why do Americans not eat more caviar? This was so amazingly delicious, subtle smokiness and salinity from the trout roe atop silky cream cheese with paper thin dilled cucumbers and crunchy everything bagel chips. It was a magnificent take on bagel and lox. 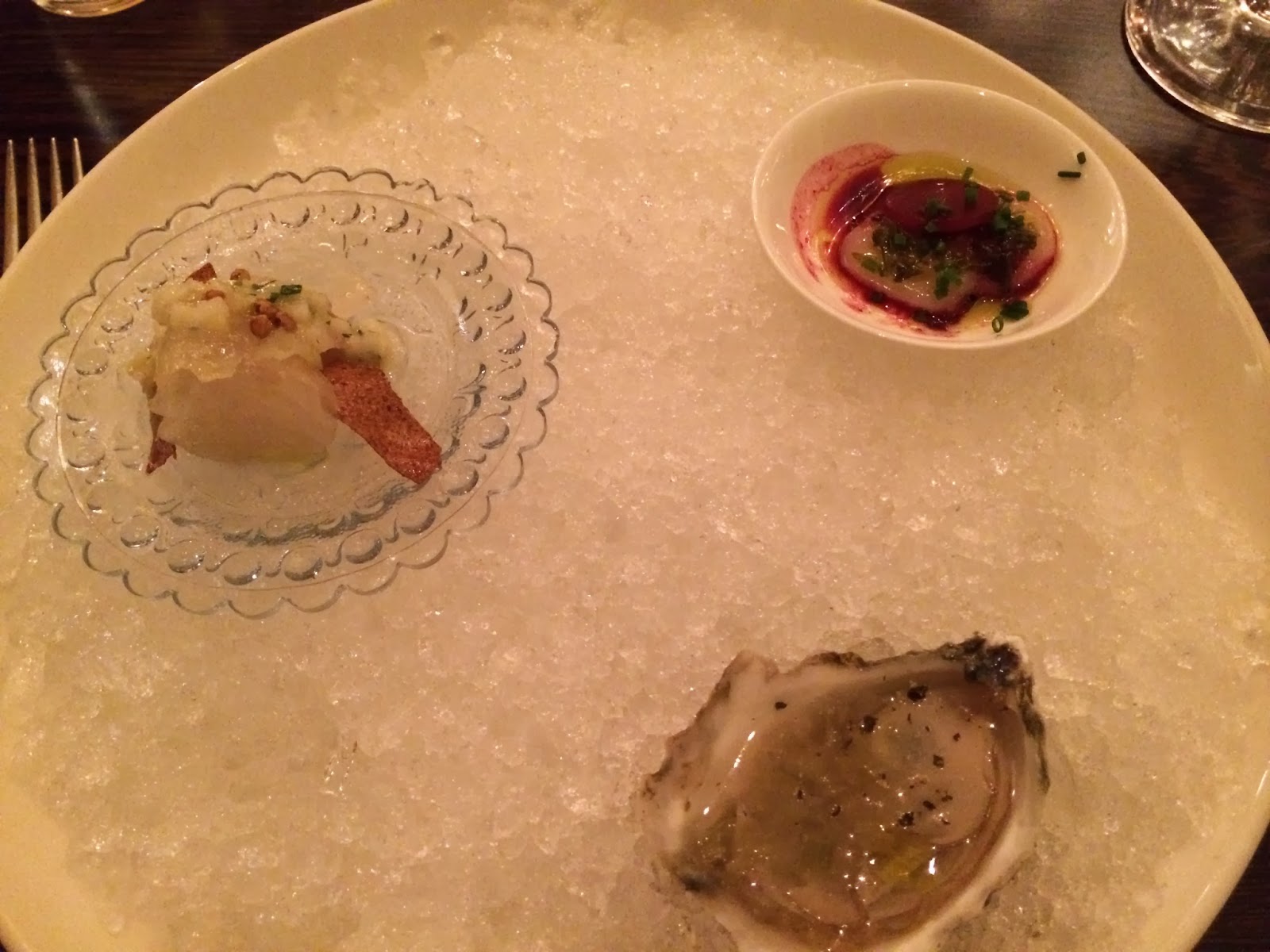 Next was a raw bar for one with a trio of cold, raw, ocean treats. First was the wianno oyster from Boston with its aethereal brininess kissed by a gazpacho vinegar. Similar to a kumamoto, it was a the closest thing to a West Coast oyster I've had on this east of the Mississippi. Next was the seaweed cured fluke with pear tabouli on a buckwheat cracker. The funkiness and crisp texture of the buckwheat cracker with the sweetness of the pear set against the fluke's freshness was a delight. Finally, a raw scallop with a beet juice soaked radish slice and chives was a perfect mouthful. Each found a different way to balance the sweet and  the salty to great effect. 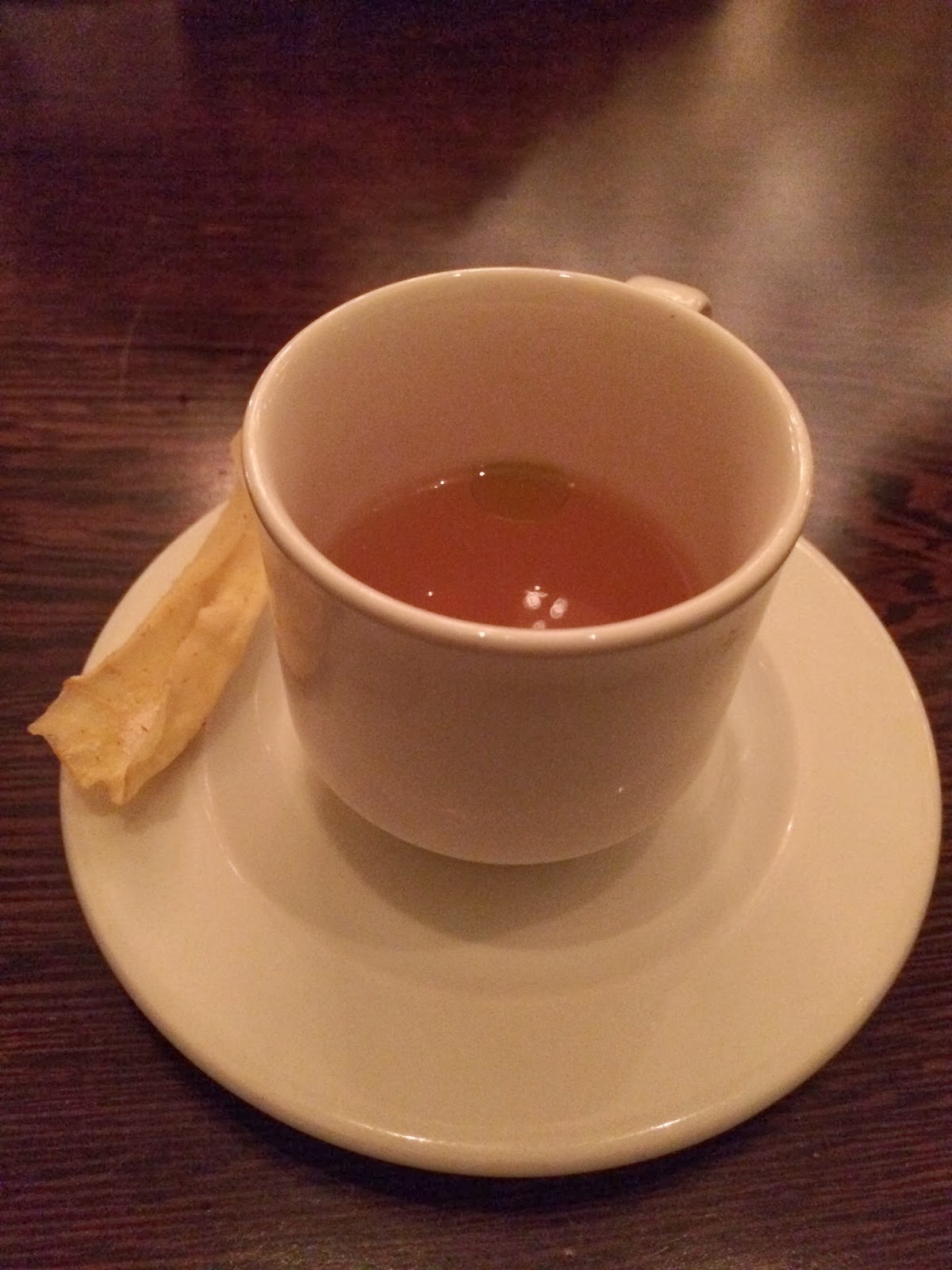 The amuse bouche that followed, a cup of parsnip tea, was possibly the best thing of the night. Sweet with a hint of savory (as only a a root vegetable can manage), I was convinced this "tea" was spiked with honey. It was not. I cannot wait to try this for a crazy Thanksgiving treat. 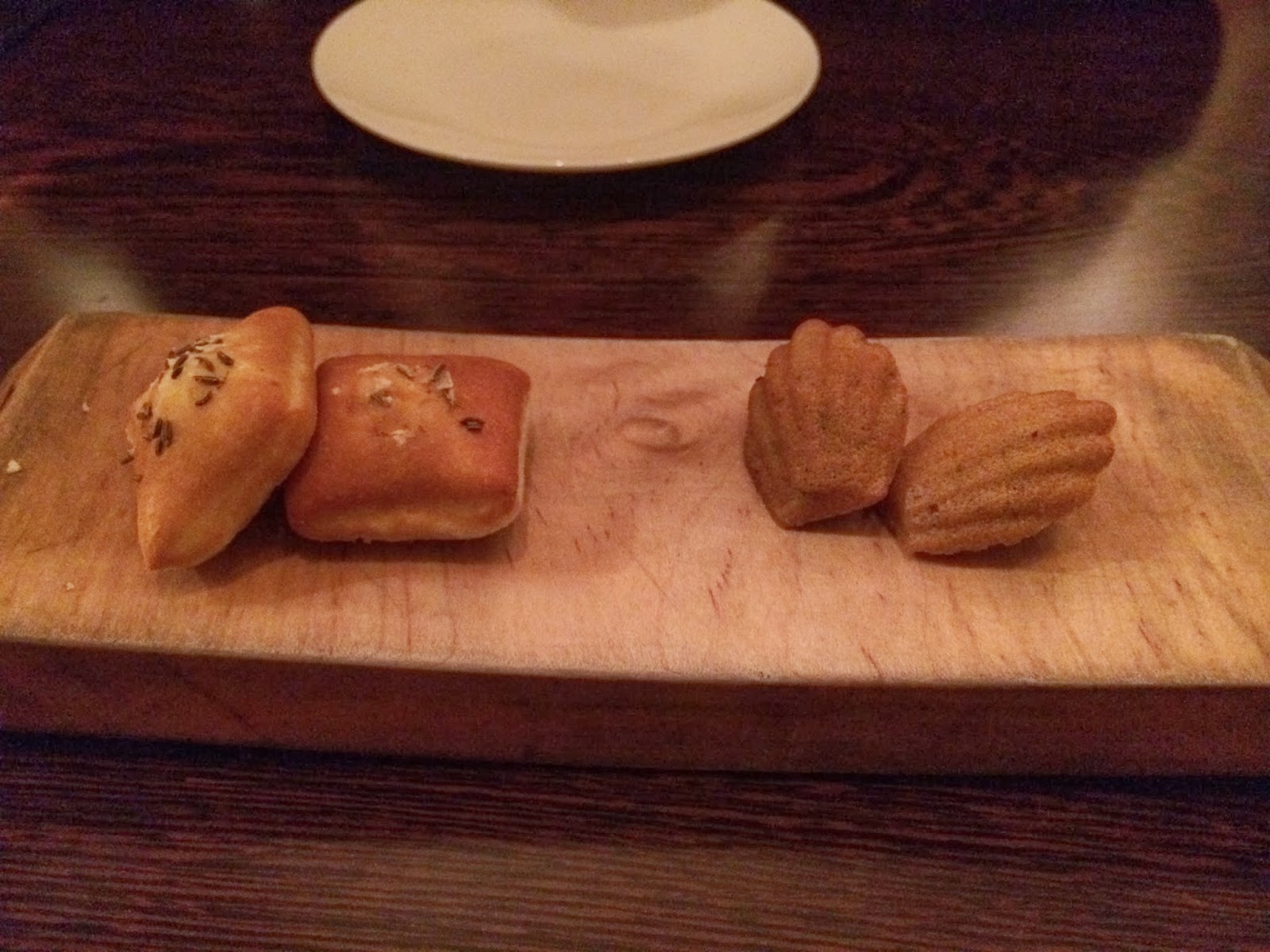 Tea must have a nosh to accompany it, so Chef Kulp served a clam madeline (yes, clam) and a pretzel filled with house made cheese whiz, more akin to a fondue the bright orange cheese product. Though the pretzel was doughy lacking the alkaline induced crispness of a good pretzel, the clam madeline was intriguing and ever so slightly wonderful. 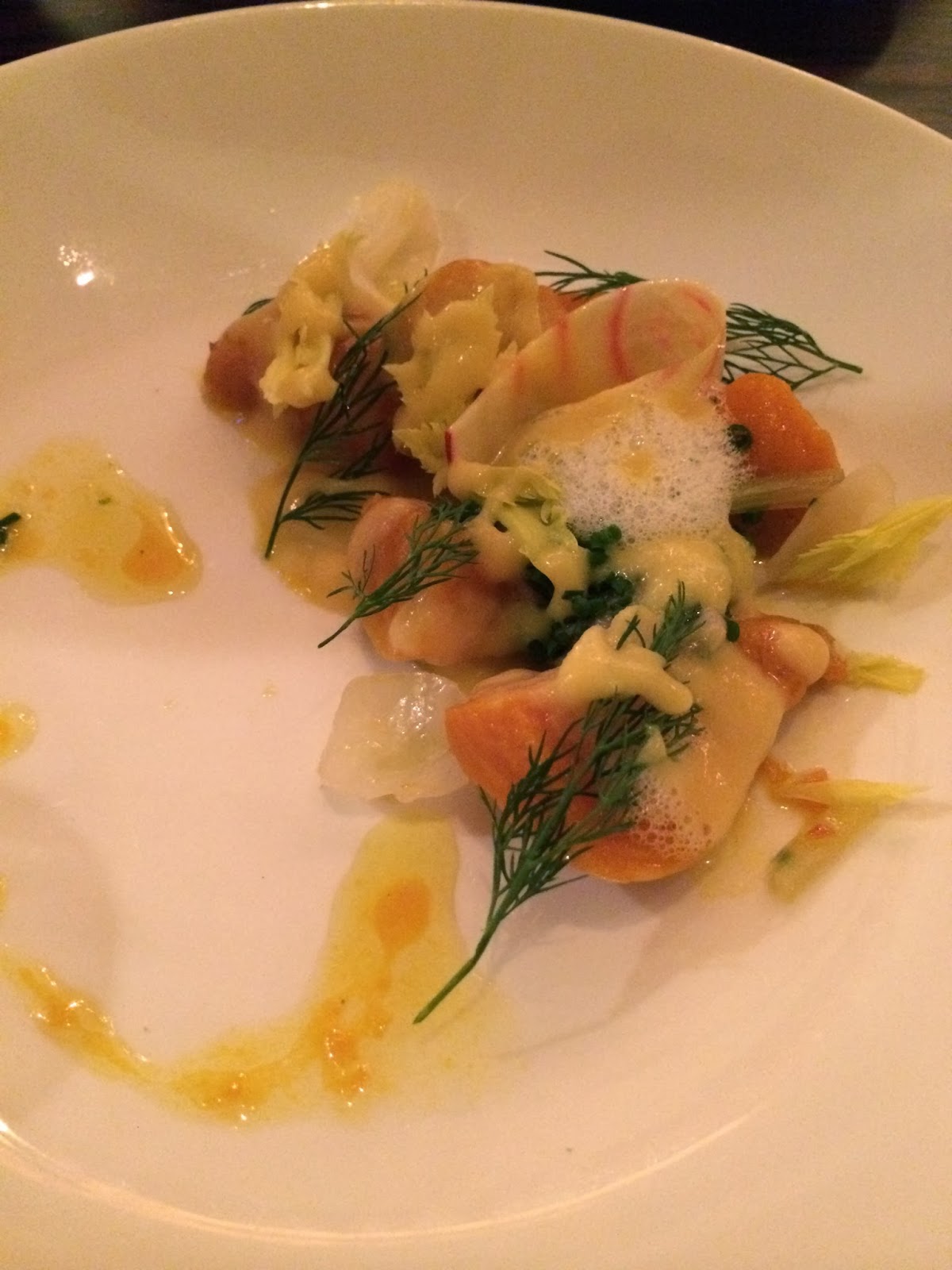 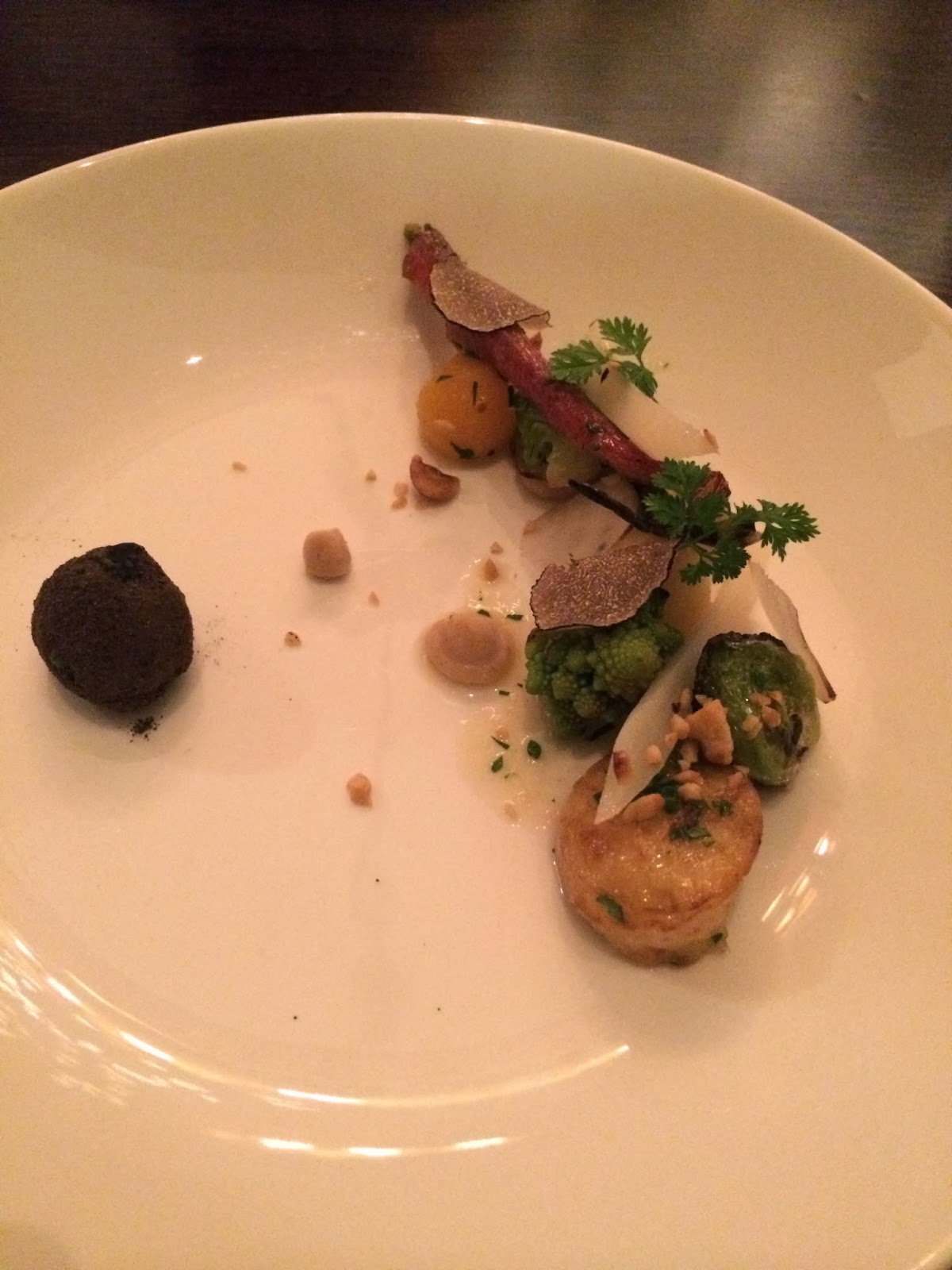 Root vegetables were showcased in the next course, in two different dishes. One consisted of spruce smoked yellow and chioggia beets with a poached oyster, horseradish, and green jasper. The second dish included autumn root vegetables including rutabaga. carrot, romanesco, with caramelized celeriac, hazelnuts, and quince. There is nothing better than root vegetables in fall, and Chef Kulp made this dirt candy taste sophisticated with flavor layered upon flavor. 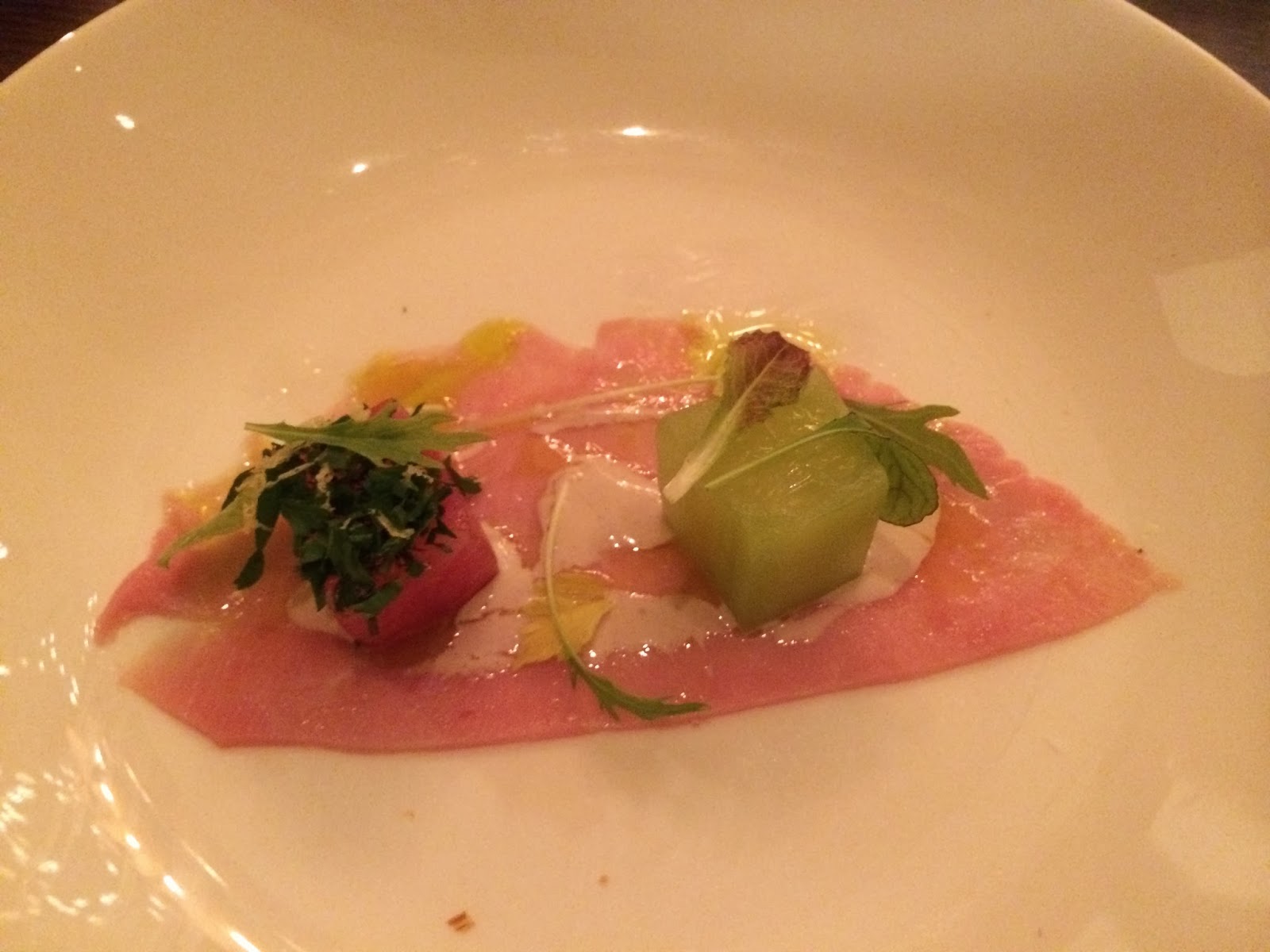 One of the highlights of the night was the Chef Kulp's "vitello tonnato," an East meets West raw version of the Italian classic. Veal carpaccio, raw tuna, melon, and the tonnato sauce came together in unexpected lusciousness. I would eat this all day long. 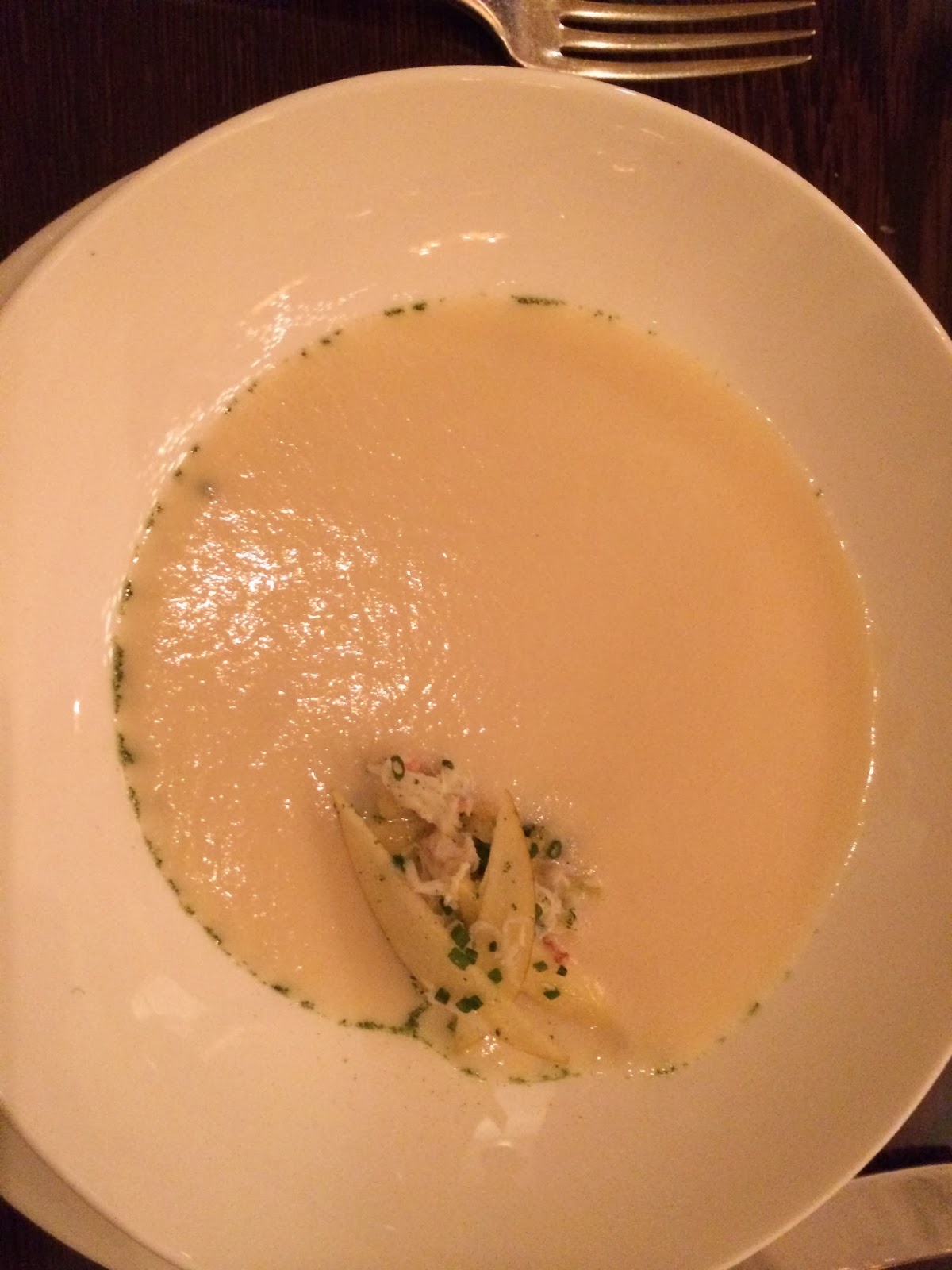 Crab apple soup was a fun play on words that combined honeycrisp apples, peekytoe crab, and bay leaf dust. One of the most unexpected dishes of the night, the soup grew on the taste buds. Chef Kulp is fixated on balance. Here he tames the sweetness of the apple with the savory clam broth, and it works. 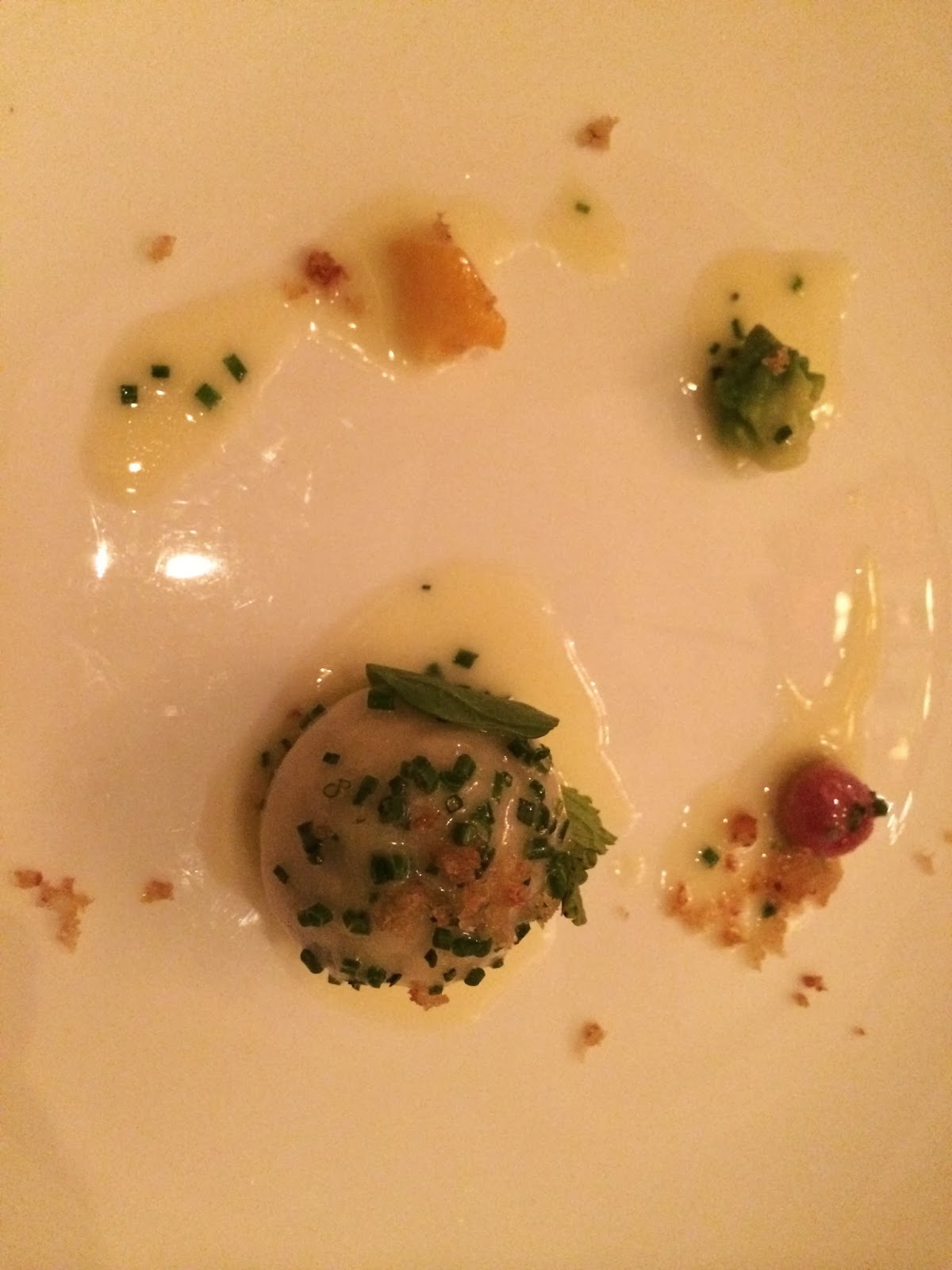 The autumn green gnudi were truly wonderful. In fact, I would have been happy to gnaw on gnudi all night long. Unlike common gnudi which are made with ricotta, Chef Kulp uses cloumage an artisanal lactic curd from Sly Brothers Farm in West Port, Massachusetts. For these gnudi, the cloumage is mixed with mustard greens and sealed in an egg and flour wash that forms a silky pasta wrapped for this cheesy dumpling. 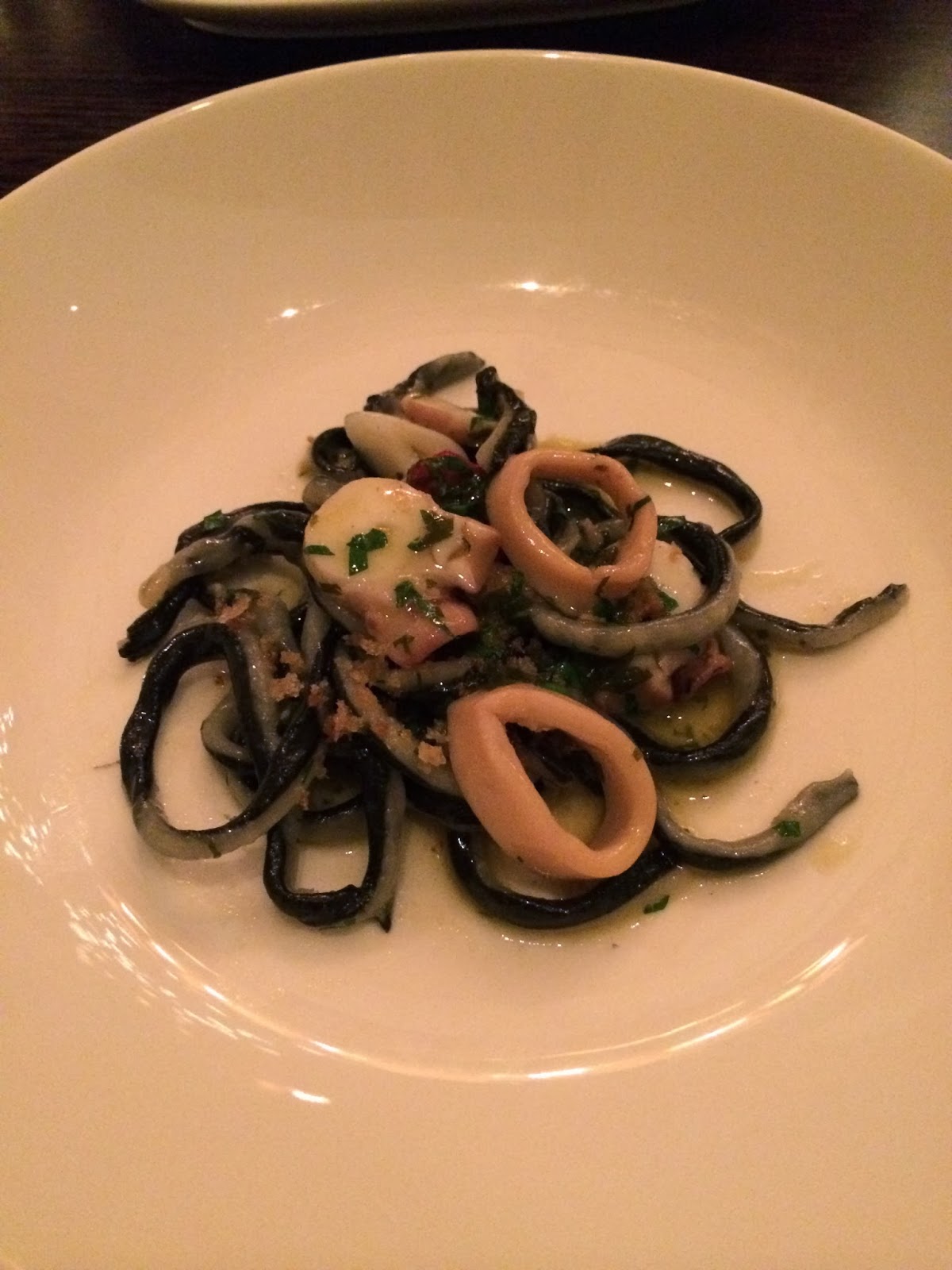 The black and white pici is a hand rolled pasta that combines a squid ink pasta with a plain pasta, creating what looks like baby eels wriggling on the plate. Served with perfectly tender calamari and octopus, a pickled chili introduced a fruity heat that added an extra dimension to the dish. 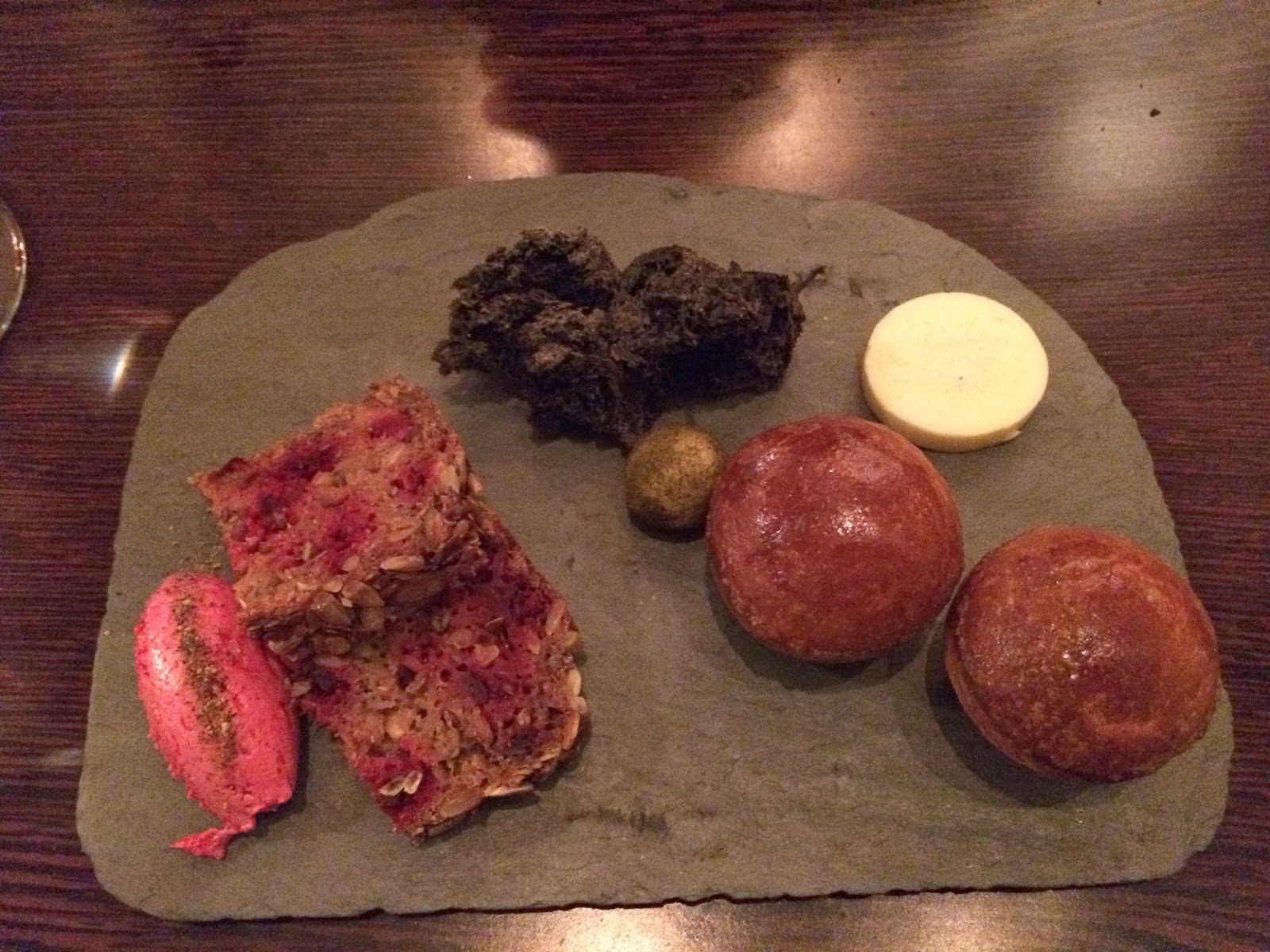 Following the pasta course was a bread course intermezzo like no bread you have ever had before, one meat (a brioche made with beef fat from strip steaks), one vegetable (with beet, leek, and zucchini), and one fish (squid ink). 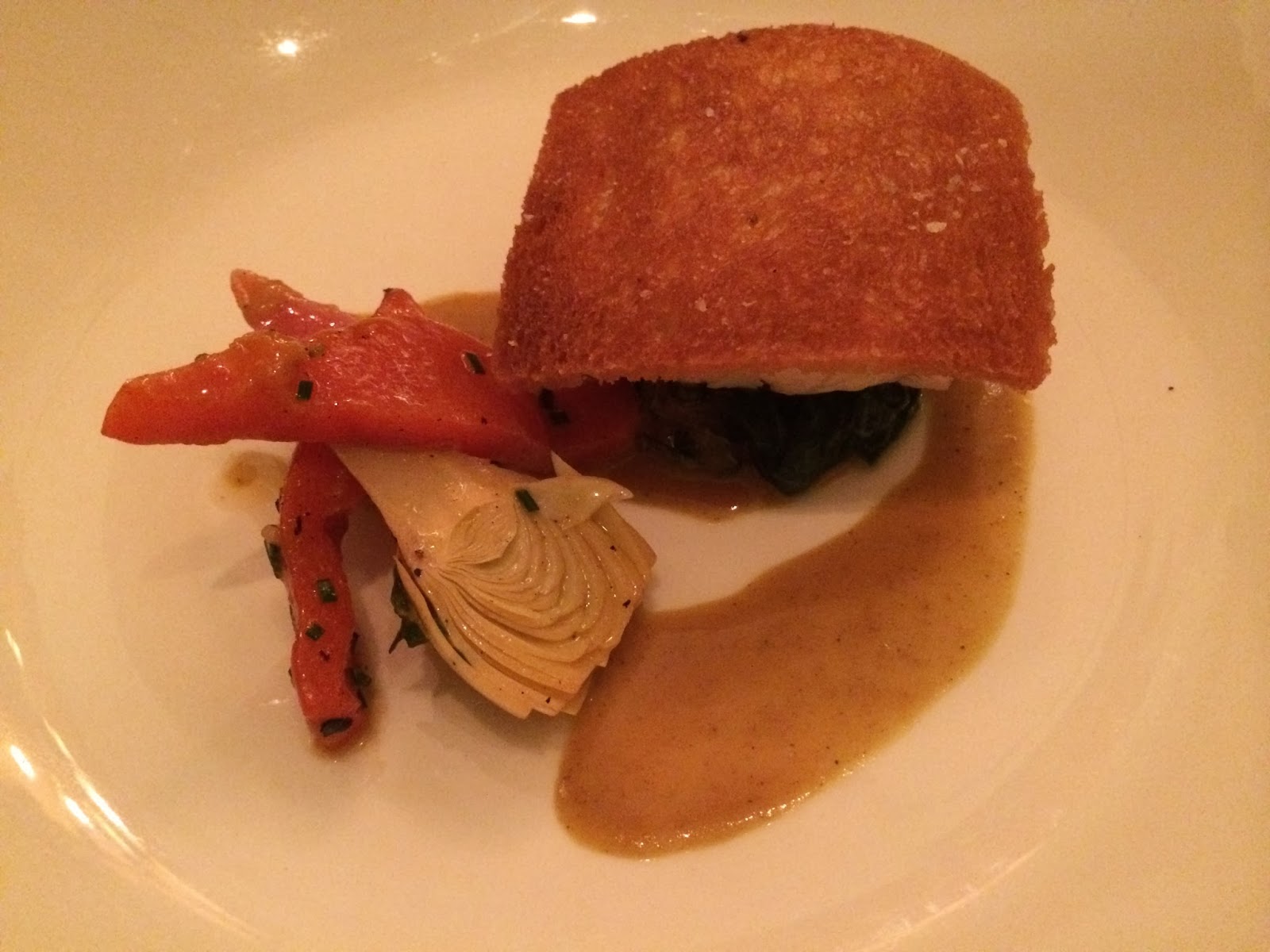 The fish course was a delicate branzino en croute, with a crispy slice of pullman loaf in place of the traditional puff pastry, served with an artichoke and peppers with a spiced tamarind broth. The crisp en croute was both whimsical and delicious. 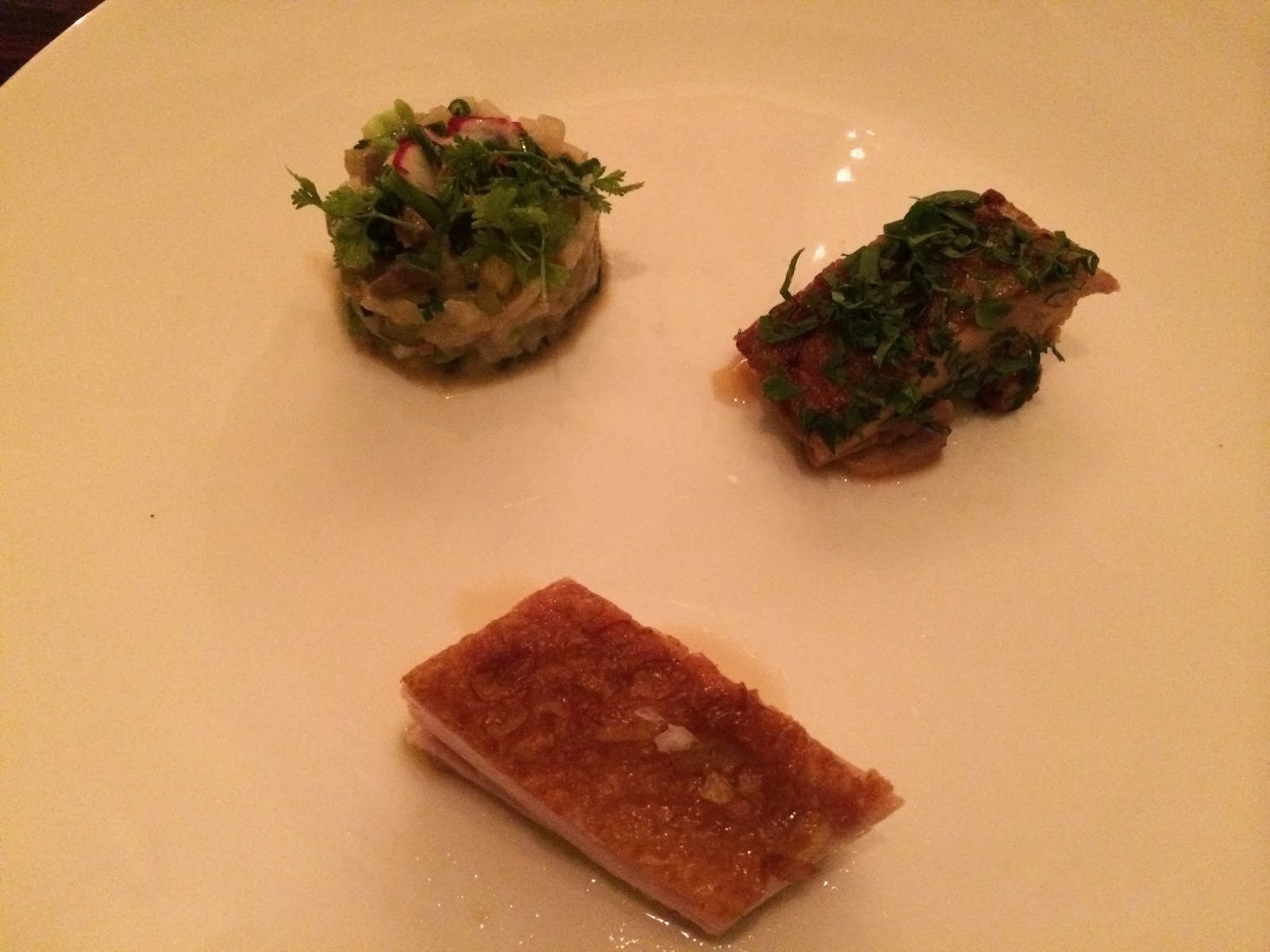 Dry-aged guinea hen served two ways with dirty rice and herb salad indicated the meal was drawing to a close. The dry-aging, a technique often used with beef, concentrated the flavor of the fowl. Crispy breast and succulent thigh delivered a powerful punch is just a few bites. 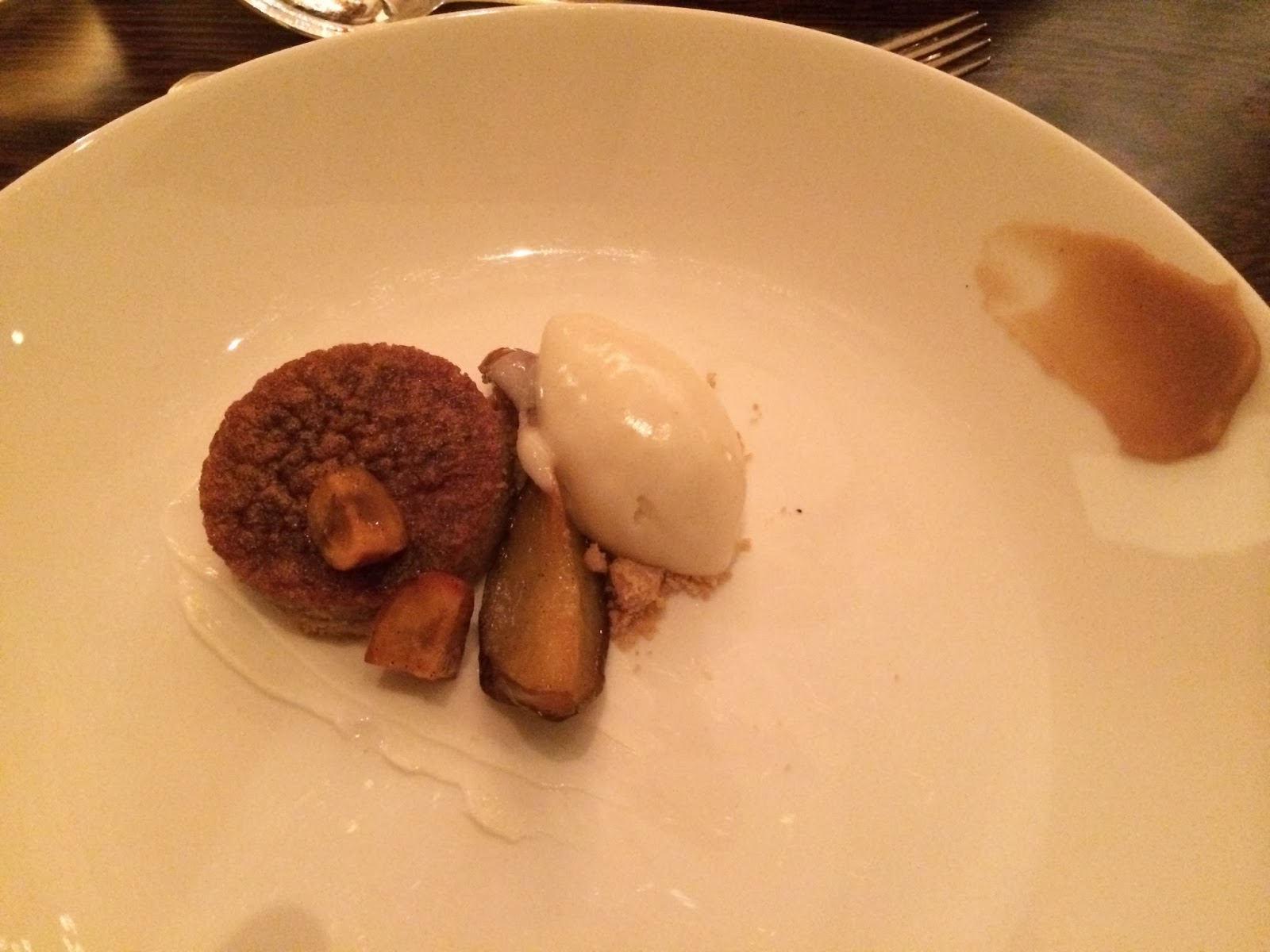 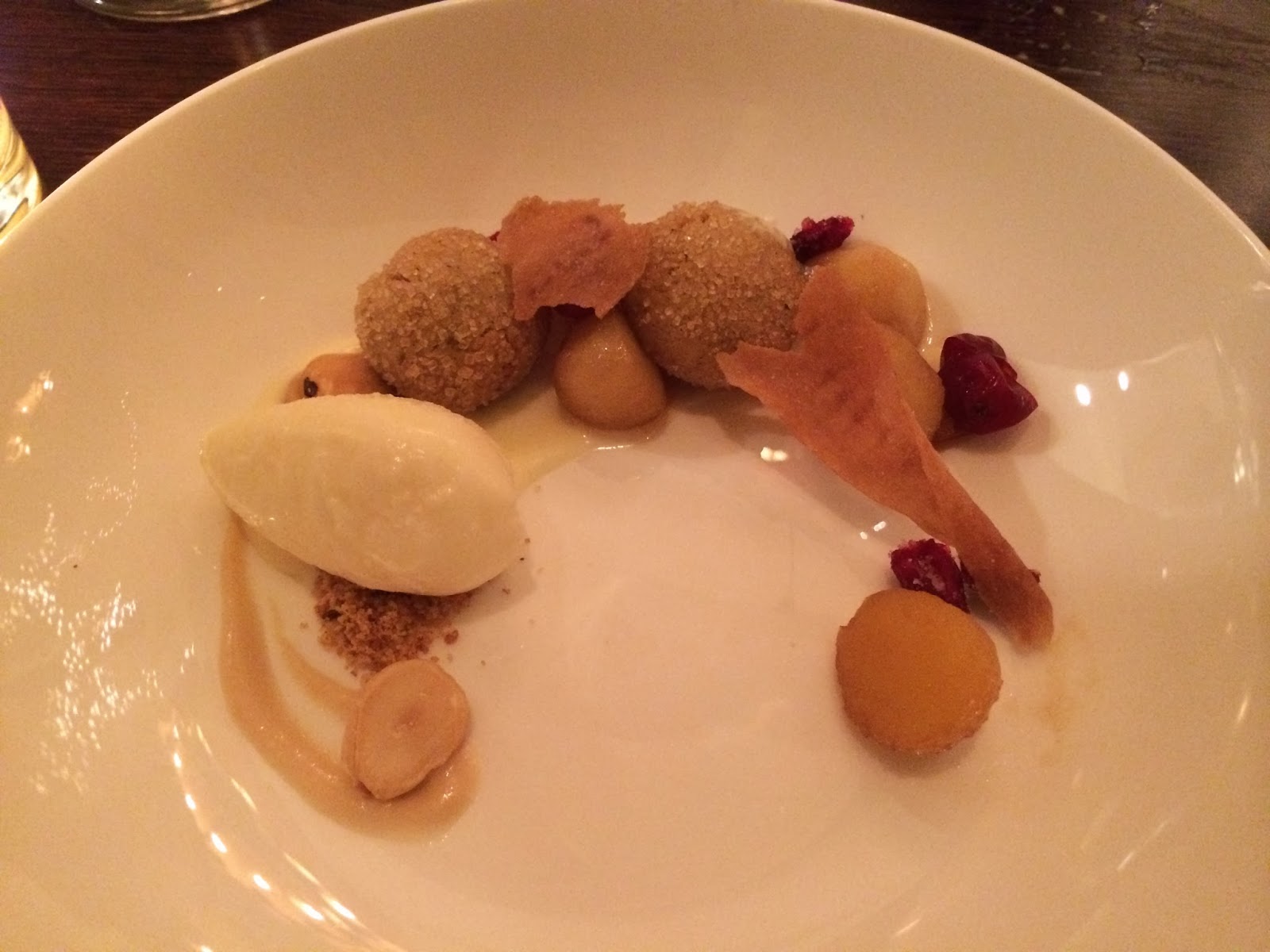 Dessert was another two part affair. First was the brown butter tart with pear, chestnut, and pear sherbet which balanced the savory characteristics of the chestnut and the tart with the autumnal sweetness of pear. The bittersweet almond included amaretti, poached apples, and buttermilk ice cream. Each offered a tasty end to an evening of indulgence, and I happily demolished both.

Chef Kulp and Ellen Yin have remade Fork, ensuring that it will continue to be a jewel in Philadelphia's culinary crown. Creative and wonderful at every turn, there was but one real misstep, a couple of radishes that tasted of salt and nothing else. Other than that, it was one of the best meals I have had in a very long time. I can't wait to go back. And I'm looking forward to sampling Chef Kulp's more casual offerings at High Street on Market too.