Regardless of what others might think, I thoroughly enjoyed Thor: The Dark World. Of course, I don't go to see comic book movies for inventive, new stories. I go for epic battles, witty banter, heroic sacrifice, and a little rivalry, sibling or otherwise, never hurts. The second installment of Thor provides it all, with a healthy dose of love story, which thanks to Natalie Portman is actually tolerable.

Since the end of the original Thor and The Avengers, Loki has been imprisoned on Asgard, the Bifrost has been repaired, and Thor has been cleaning up the Nine Realms, proving himself worthy of Odin's throne, though his victories bring little satisfaction. As the convergence of the Realms approaches, an event that happens only every 5,000 years, strange occurrences on earth ultimately reunite physicists Jane Foster and Erik Selvig and the worst intern ever, Darcy Lewis . When Jane momentarily disappears from the all seeing vision of Heimdall  keeper of the Bifrost, Thor travels to earth and brings her to Asgard. Meanwhile, the Dark Elves led by Malekith, an ancient evil defeated at the last convergence by Odin's Father, return seeking the dark energy known as Aether that Malekith plans to use to bring darkness to the universe. 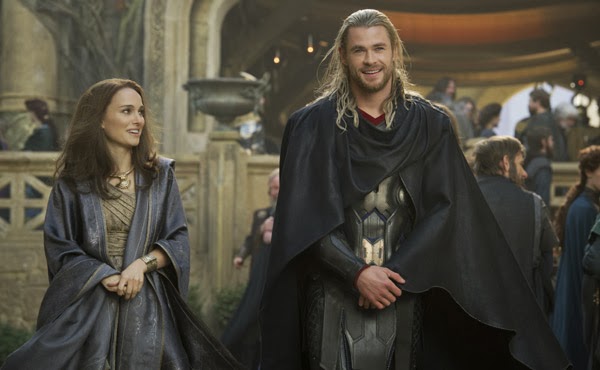 Thor: The Dark World nicely explores the relationship between Loki and Thor as they are forced to work together for the sake of salvation and vengeance. The repartee between the brothers offer genuine moments of ribald humor and deep poignancy, and yes when each one of Thor's friends warns Loki they will kill him if he betrays his brother, it is campy, but it works.

Ultimately what makes this movie work is the cast. Tom Hiddleston has become a fan favorite for a reason; he is compelling as a villain you can't quite hate, which opens you up to surprises. Chris Hemsworth continues to grow into the lead role, adding depth to what could be a very two-dimensional character. Natalie Portman is the to be the beautiful genius who is every bit as important to saving the universe as the God of Thunder. Jane's intern Darcy played by Kat Dennings (who now has her own intern and her own tiny subplot) is every bit as crazy and sweetly annoying as she was in the original. Idris Elba and Anthony Hopkins bring gravitas and majesty in their roles as Heimdall and Odin. Rene Russo brings her own dignity to Frigga, whose confrontation with Malekith proves her to be every bit as powerful as Thor and cunning as Loki (or the other way around). Stellen Skarsgård brings great comic relief that is very different from the role of Dr. Selvig from the first Thor but is a direct result of his encounter with Loki in The Avengers. Christopher Eccleston's Malekith, hardly recognizable as the Ninth Doctor under all the makeup, keeps five millennia of rage just barely in check. 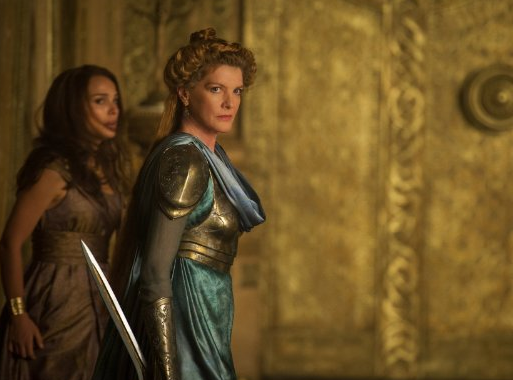 I hope director Alan Taylor will do more in the world of super hero/comic book/fantasy/sci-fi movie making. Coming out of the world of television, directing Game of Thrones obviously gave him the chops to take on a big budget production of Thor: The Dark World. I can't wait to see what he takes on next.

Thor: The Dark World is not a perfect movie, but it is fun. To those who were bored or couldn't follow the plot or thought it was just too campy, the problem isn't the movie. It might just be you.

CrazyCris said…
Great review! I had a blast with this one, MUCH better than the first! :o)

All in all I'm quite impressed with what Marvel is doing with their cinematic universe. An elegant tapestry with threads leaving from one film and entering another...

And like you I don't go to comic book movies for inventive new stories. I go for the pure entertainment factor of epic battles, fun dialogues, great characters and fabulous actors! Which unfortunately don't always converge in comic book movies... unless it's Marvel! ;o) (I just saw Captain America: The Winter Soldier today, fun!!!)
2:52 PM