The story of the forty-seven ronin comes from Medieval Japan, where a good and honorable samurai is executed by the shogun through the treachery of a rival samurai. The retainers of the executed samurai then took the next year plotting their revenge, and biding their time until their master's rival let down his guard. When the time was right, the 47 ronin took their revenge, and when ordered to commit seppuku themselves, they obliged without complaint, restoring the honor of both master and retainers and becoming the ultimate exemplars of bushido, the way of the warrior in samurai culture. It has been the subject of multiple fictional retellings, including a wonderful novel by Laura Joh Roland called The Ronin's Mistress.

Now the "47 Ronin"  is a big budget CGI fantasy adventure, moving the story to a realm of mythical beasts and evil witches. The potential here was massive, and I so wanted to love this movie. Then they announced the star, Keanu Reeves, the world's most wooden action hero ever. All that potential for greatness transformed into potential for utter to become a supremely awful film, ready to assume its place alongside such disasters as Gigli, Catwoman, and Battlefield Earth. 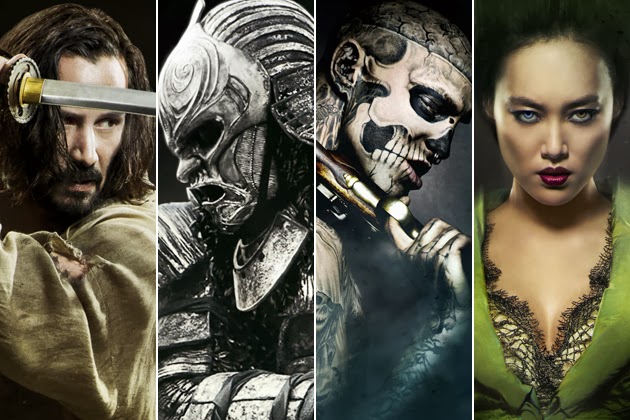 Instead, every superlative but one - negative or positive - has deserted this movie, leaving a $175 million monument to mediocrity, and Keanu Reeves is the least of their problems. The film suffers from a multitude of issues - the story, the pacing, the characters, and a subplot bolted on to no avail. First, the screenplay never explores the story of the 47 ronin in any more detail than the opening paragraph here. There is no nuanced answer to why these ronin seek revenge. They never explore the origin of their new character Kai, the half breed raised by demons played by Reeves, but for a few single scenes that leads to more questions than answers.

It is obvious the director Carl Rinsch - a first timer - so much so that he refuses to cut away enough to make the film move at a pace beyond agonizingly slow. Everything take too long to happen, and not enough happens. How's that for confused? Finally, the stilted romance between Kai and Mika can only be the product of a studio note hoping to convince women to see the film. Missing from the source material, the romance brings nothing to the movie.

The film is gorgeous - its costumes and scenery - which makes it even more disheartening that it is so very unremarkable. What "47 Ronin" needed more than anything was an experienced fantasy director like Guillermo del Toro, but instead we sing the ode to opportunities lost.
Japan Movies