Lawrence in Arabia by Scott Anderson 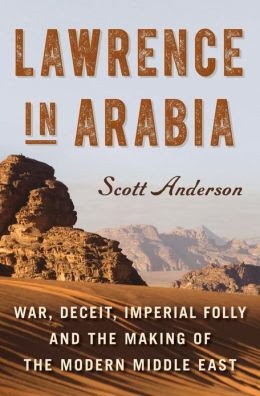 The death of Peter O'Toole in December left me nostalgic to watch one of my favorite old movies, "Lawrence of Arabia," which then pushed me to take the plunge and read Scott Anderson's new biography of T.E. Lawrence titled "Lawrence in Arabia: War, Deceit, Imperial Folly and the Making of the Modern Middle East." What Anderson presents is an unflinching look at the scholarly archeologist-cum-soldier, his two year flirtation with the brutality of desert warfare, and the way he was changed and ultimately broken by this experience.

The book focuses on Lawrence's championing of the Arab tribes led by Sharif Hussein of Mecca and his sons in their rebellion against the Ottoman Empire (with the encouragement of the British Empire). Anderson creates a rich tapestry describing the Great War - the war to end all wars - so that the reader never forgets that this conflict, that played out throughout modern day Egypt, Iraq, Saudi Arabia, Yemen, Israel, Lebanon, Syria, and Jordan, is part of a much greater whole. As Anderson writes in his introduction:

"In terms of lives, money, and matériel expended, in terms of the thousands of hours spent in weighty consultation between generals and kings and prime ministers, the imperial plotters of Europe were infinitely more concerned over the future status of Belgium, for example, than with what might happen in the impoverished regions of the Middle East."

This lack of concern for the desert hinterlands would allow a single man - Lawrence - to influence events during the war until the peace conference in Paris, when the imperial planner would once again exert their influence.

After graduating from Jesus College at Oxford and spending three years in Syria on an archaeological dig at Carchemish, T.E. Lawrence would find himself volunteering his intimate knowledge of the Middle East to the British Empire first as civilian cartographer, then as a junior officer (in order to brief a general who refused to be addressed by a civilian,the first of several awkward promotions Lawrence would receive). Sent to Cairo as an intelligence officer, Lawrence's linguistic talents, familiarity with terrain, adaptability, and genuine respect for the Arab tribesman allowed him to assert his ideas first through intelligence reports and then on the ground as an advisor to Faisal Ibn Hussein. Lawrence adopted the Arab dress of those he advised, and took it upon himself to help the Arabs secure a future for themselves, free of the yolk of the Ottomans and free of the imperial designs of both the French (whom he despised) and his own British superiors.

Nearly a century later, what Anderson present in this modern reassessment of Lawrence of Arabia is a very complicated human being, both the heroic figure idealized by many and the broken man whose suffering caused him to change his name twice to avoid the the celebrity of his exploits. Here was a man whose hubris drove him to commit treason against whose own country (he revealed the contents of the Sykes-Picot Agreement between Great Britain and France on the disposition of the Middle East to Faisal) because he was convinced he knew what was better for both the Arabs and the British Empire - a free and independent Arab state. At the same time, his memoir Seven Pillars of Wisdom is 600+ pages, much of it self aggrandizement, but he never printed more than 200 copies and he donated the proceeds from Revolt in the Desert, which could have made him a wealthy man, to an air force charity to benefit veterans of WWI.

Without psychoanalyzing Lawrence overly much, Anderson turns his biographer's gaze to the darkest moment of Lawrence's life, the probable rape and torture he suffered in Deraa. Comparing what Lawrence wrote in his official reports, Seven Pillars, and letters to confidants after the war, Anderson pieces together what - in the absence of eyewitnesses and reliable evidence - is a strong case that "something happened in Deraa. Many of those who knew Lawrence best would report a change in his personality, an even greater remoteness, dating from around that time. It was also soon afterward that he began organizing a person bodyguard...." In the end, T.E. Lawrence was witness to and victim of - and some might argue perpetrator of - the very worst of humanity in war time. As Anderson argues, Lawrence certainly suffered from PTSD after the war as a result of all that he had seen and done and had been done to him, and more poignantly all that he had not done or had been unable to do. The final insult was having to witness at Paris the final betrayal of the Arabs by imperial Europe. He did make one last effort, assisting Winston Churchill as Colonial Secretary who tried to make the best of a terrible situation. In Seven Pillars of Wisdom,

Lawrence wrote that Churchill "made straight all the tangle" in the Middle East, fulfilling Britain's promises to the Arabs "in letter and spirit (where humanly possible) without sacrificing any interest of our Empire or any interest of the peoples concerned."

What makes Anderson's biography such a triumph is not just the story-telling and research on T.E. Lawrence (some of which has only recently been declassified) but his inclusion of other key actors in the Middle East, contemporaries of Lawrence. He focuses on three specifically, a German diplomat-cum-spy, an American oilman-cum-spy, and a Jewish Zionist-cum-spy. The story of Curt Prüfer, the German spymaster's whose machinations on behalf of the Kaiser and in service of the Young Turks then ruling the Ottoman Empire, helps to flesh out what was happening on the other side. William Yale, an American aristocrat fallen on hard times (the Ivy League university is named for his family), who went to work for the Standard Oil Company and found himself in the Middle East when war broke out; his inclusion is more about representing the American perspective and rather than his minimal contribution. Aaron Aaronsohn was a world famous agronomist living in Palestine whose commitment to the idea of a Jewish homeland in Palestine put him on a collision course with Lawrence's ideal of a free and independent Arab state. Both Aaronsohn and Yale, with Lawrence, would attend the Paris Peace Conference, a disaster if ever there was one for the 20th century. Anderson manages to weave all of this together into a whole much greater than the sum of its parts.

After T.E. Lawrence's untimely death as a result of a motorcycle accident, immortalized in the opening of the 1962 movie "Lawrence of Arabia," Winston Churchill opted, appropriately, to remember all that is deserving of our admiration, saying "I deem him one of the greatest beings alive in our time. I do not see his like elsewhere. I fear whatever our need we shall never see his like again." Times had changed, and maybe never again will a solitary man be able to make war against an empire mounted on a camel. Nearly a century later, there are still lessons to be learned from the story of Lawrence's adventures in Arabia.
Books Lawrence of Arabia Ottoman Empire Turkey