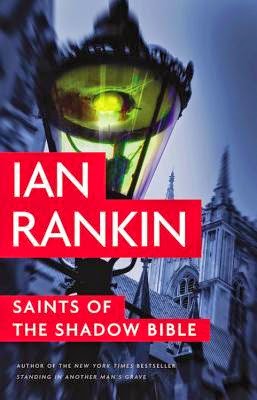 Being a fan of crime fiction and mysteries, I feel late to the Ian Rankin party. While contemplating a vacation to Scotland, I learned about Rankin's oeuvre, all set in Edinburgh. Starting with his newest offering Saints of the Shadow Bible would serve as a test; if it was good, I will have found a treasure trove of new titles to keep me busy.

Though there is significant back story to which, as a new reader, I am not privy, Rankin's story telling in the Saints manages to communicate all  all this necessary facts once needs to know, without a tedious recitation that long-time readers find boring. (Yes, I'm talking to you Sue Grafton.) Saints pits the old against the new in the realm of police investigations, where it's snitches and favors v. forensics and Google searches. Detective Sergeant John Rebus (demoted for past sins in past novels) represents the old, and internal affairs (complaints department) inspector Malcolm Fox represents the new, while Detective Inspector Siobhan Clarke stands between the two.

When Scotland's Solicitor General opens a new investigation into a murder from three decades prior, Fox is the lead investigator and Rebus is squarely in his sights. Billy Saunders, a police snitch, was accused of murder, but the case fell apart due to either police incompetence or outright obstruction. At the time, Rebus had just joined Summerhall and joined the Saint of the Shadow Bible, those detectives whose commitment to fighting crime was not to be hindered by the niceties of the law. They were known to plant evidence, beat confessions out of criminals, and, when the courts failed, to take the law into their own hands. Rebus manages to insinuate himself into Fox's investigation, though neither man trusts the other, and both hope to use the other to their own ends. Once Billy Saunders ends up dead in a canal, all bets are off.

At the same time, three other investigations - a car crash, the death of the Scottish Justice Minister, and another body in a canal - keep Rebus and Clarke busy. The relentless pursuit of coincidences and intuition with just a wee bit of intimidation leads to resolution, and respect for both the old ways and the new. Rankin manages to tell not only a good detective story, but a very human story that probes politics and business, the foibles of fathers and sons, and how virtues like loyalty and honesty can indeed become vices.

My only question, which Ian Rankin novel next?
Books Detective Ian Rankin Scotland