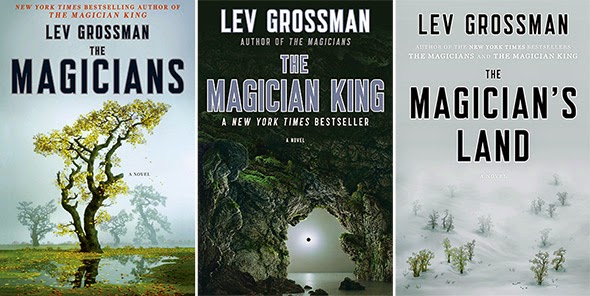 Sometimes, it pays to discover a trilogy only upon the final installment is published. Thanks to Aisha Tyler, who has mentioned The Magicians by Lev Grossman several times on her Girl on Guy podcast, I embarked on this epic journey just as The Magician's Land was making its appearance. Lev Grossman, book editor for Time magazine, has explored two what if questions: What if Hogwarts was for college kids instead of middle and high schoolers? and What if Narnia was real and someone found a way to visit? The Magician Trilogy has been called derivative, and though that is true, it is not done blindly nor blithely, and it is not meant to be hipster ironic either. It is homage, an author investigating the worlds and ideas of another.

So hear are my top seven things to love about The Magicians Trilogy by Lev Grossman, without spoilers.

If you are an adult who loves J. K. Rowling or J. R. R. Tolkien or C. S. Lewis , go read these books, unless you are so uptight that the reality of our modern world offends your sensibilities. Lev Grossman has given a gift to all of us who grew up wanting to find a way to Hogwarts or Narnia or Middle Earth.