Some Broadway shows tell a poignant story, others are fall down funny, and still others showcase a selection of songs. Then, there is the star vehicle. Hello, Dolly! is just that, and there is no more perfect a star for the role of Dolly Levi today than Bette Midler. Every time she was on stage it was just her and the audience, and this 71-year-old left nothing in reserve. From the moment she arrived on stage to the final bow, it was hard to look at anything other than Bette out of fear that I might miss something. Yet there was so much worth looking at, including some of my favorite costumes ever. Bette's every look, every step, every turn is in service to comedy, and the the audience of course. Her smile would light up the theatre every time, and I'm sure every one of the 1430 in the audience thought it was for them. When she finally made her appearance for the the 11 o'clock number and title song, all in red sequins and feathers at the top of the staircase, there was no stopping her or the audience. When toward the end of the number she leaned against the proscenium arch feigning exhaustion, the crown ate it up. And when she offered an encore twirl, acknowledging the the standing ovation (not one of those perfunctory standing O's at the end of most shows these days), we loved her for it. 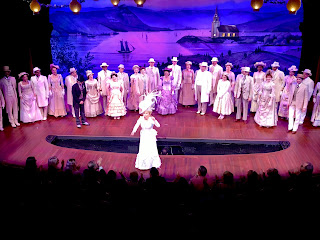 This was in many ways the greatest Broadway experience of my life. The recipe for success here included an extra dose of star power: David Hyde Pierce as Horace Vandergelder. What he manages to do with a wiggle of his moustache is amazing, and restoring the cut song “Penny in My Pocket” was a stroke of genius on the part of director Jerry Zaks. Sung in front of the curtain at the opening of the second act, I still cannot understand why the song was cut, unless it was a hedge against the star being over shadowed. Bette is not a star, she is a supernova, so there was no chance of that, even with all of Pierce’s considerable talents. The addition of an ensemble that danced their hearts out and actors who were charming and funny in all the other roles – including newcomer Beanie Feldstein as Minnie Fay – meant Hello, Bette!, I mean Dolly, will be nearly impossible to top.

Should she need a break, I nominate Megan Mullally to stand in. Holy caboosesI have to get back to see it again.

*Credit to Sara for the "Hello, Bette!" line.