Sondheim Off Broadway with Pacific Overtures

Today it was Sondheim, again. Directed by minimalist John Doyle, again. I first saw Doyle direct in the brilliant  2005 version of Sweeney Todd, followed soon after by the slightly less brilliant (ok, derivative) Company. I'm a fan, and Pacific Overtures proves once again that Doyle channels Sondheim like few others. This new production at the Classic Stage Company was delightful...and disappointing, if that is possible. Ok, disappointing is not exactly fair, or right, but I will try to explain.

Pacific Overtures tells the story of the arrival in Japan of Commodore Matthew Calbraith Perry and the US Navy after nearly 250 years after the expulsion of the last westerners from the island empire. The story is told from the point of view of the Japanese, initially refusing contact but ultimately witnessing the disintegration of the samurai culture that had ruled for a millennium.

First the delightful. The cast of this production is immensely talented, led by George Takei (oh my, yes, that George Takei) as the Reciter, the narrator, who brings the gravitas befitting both the role and the a Sondheim musical nominated twice for best musical in the original and the revival. The great challenge for the other nine cast member must be remembering which character they are playing at any given moment, as each doubles and triples throughout. 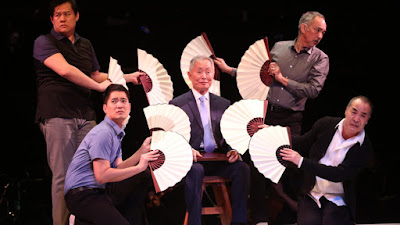 In this cast of skilled singer-actors, two stood out from the crowd. Ann Harada steals the show as the Madam in the song "Welcome to Kanagawa" where she sings one of Broadway's great bawdy songs with the same comic flair that made her such a hit as Christmas Eve in Avenue Q. Austin Ku shines as the Boy in "Someone in a Tree" where he manages to transform into a 10 year old before our eyes, without the help of costume or makeup.

In "Please, Hello," where the Shogun is confronted by the barbarians each seeking his signature on a new trade deal. Ku deftly handles the Gilbert and Sullivan homage as the British Admiral while Harada leads the can-can kick line as the French Admiral. Marc Oka kills as the Dutch Admiral offering chocolate in exchange for ports in both Nagasaki and Yokahama. Kelvin Moon Loh demonstrated his Broadway comic chops as the Russian Admiral whose verse is punctuated repeatedly by the line "Don't touch the coat!" The audience couldn't stop laughing.

This brings me to my disappointment with Doyle's production. The choice only to imply costumes with the occasional draping of Japanese print fabric while the cast is dressed in what can only be referred to as street clothes (and no, there is no coat any where on stage) is disappointing considering the original production won a Tony for its costumes and scenic design. There is but the hint of scenic design here as it is performed as theatre in the round, with audience on either side of a raise platform which at one end had two raised walls (?) more like wings in a traditional theatre curtain set up with a space between where players entered and exited. Doyle as trimmed a great deal out of the script, including cutting two songs, "Crysanthemum Tea" and "Lion Dance," which allows for a tight 90 minute production with sans intermission.

Don't get me wrong, what John Doyle does with this tiny cast in an equally tiny theatre (of which Doyle is Artistic Director) is nothing less than brilliant. My disappointment comes not from anything amiss with the present production as from the fact that it seems the genius of Stephen Sondheim is not appreciated.  Doyle appreciates him, and hard core theatre kids everywhere do (witness the movie Camp), but honestly, how does Sir Andrew Lloyd Webber manage to have four multi-million dollar productions on Broadway simultaneously this year. For God's sake, one of them is about cats and another couldn't even be bothered to recruit a different actress. In the meantime, Sondheim fans get minimalist off Broadway productions like the current Pacific Overtures (which the Village Voice called "bonsai Sondheim") or extremely limited special runs like the Jake Gyllenhaal fronted Sunday in the Park with George.

I know, Sondheim asks a lot of his audience, and theatres that are packed with tourists need songs they can whistle. As my BBF (Best Broadway Friend) reminded me, the reason A Funny Thing Happened on the Way to the Forum is her favorite Sondheim show is the earworms, the songs that stick with you after the show. In Merrily We Roll Along, Sondheim pointed out the the issue himself in the number "Opening Doors,"

Yes, earworms and humming are important, but those of us who worship at the altar of Stephen Sondheim deserve something more than the crumbs (delicious though they may be) that we are tossed every now and again. Maybe, just maybe, things will change with the new musical that is on the horizon.

Bottom line, Pacific Overtures is a real artistic achievement that deserves to be seen. There are three more weeks, and I hope they sell out every show left.
Ann Harada Broadway George Takei Music NYC Off-Broadway Sondheim